Lomas Brown Net Worth: Lomas Brown is an American former professional football player who has a net worth of $2 million. Lomas Brown was born in Miami, Florida in March 1963. Brown was an offensive tackle who played at Miami Springs High School. He was named to the Florida high school football players All-Century Team in 2007.

Brown played college football at the University of Florida. In 1984 he was selected to the First-team All-SEC and was a Consensus All-American and won the Jacobs Blocking Trophy. In 1995 he was inducted into the University of Florida Athletic Hall of Fame. Brown was drafted #6 by the Detroit Lions in the 1985 NFL Draft. He played for Detroit from 1985 to 1995 and then for the Arizona Cardinals from 1996 to 1998. Brown played for the Cleveland Browns in 1999, the New York Giants from 2000 to 2001, and the Tampa Bay Buccaneers in 2002. During his NFL career Brown won a Super Bowl Championship with Tampa Bay and won two NFC Championships. He was selected to the Pro Bowl seven times and was a three time First-team and three time Second-team All-Pro. Brown was also a four time First-team All-NFC selection. After retiring he worked as an analyst and assistant coach. Lomas admitted to purposefully failing to block a player in 1994 so his teammate and quarterback Scott Mitchell would be injured and leave the game. 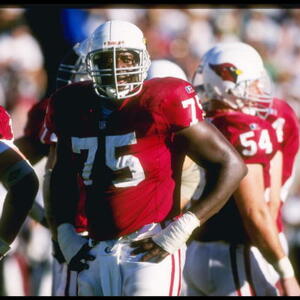