Levi Jones Net Worth: Levi Jones is a former American professional football player who has a net worth of $13 million. Levi Jones was born in 1979 in Eloy, Arizona. He played college football for the Arizona State University Sun Devils. The six-foot-five, 307-pound offensive tackle earned second-team All-Pac 10 honors in 2000 and first-team All-Pac 10 honors in 2001. He was the winner of the Morris Trophy, which is given to the West Coast's best offensive lineman at the end of every season. The Cincinnati Bengals drafted Jones with the tenth overall pick during the first round of the 2002 NFL Draft. He played in Cincinnati until 2008 before playing for one year with the Washington Redskins. Jones appeared in 94 career NFL games, starting 89 of them, and recovering three fumbles. While still playing in the NFL, Jones made headlines for his off-the-field behavior in Las Vegas when he and fellow pro player Joey Porter were involved in a fight at a Sin City casino in early 2007. The brawl apparently came about after the two routinely butted heads on the field as member of rival teams in Cincinnati and Pittsburgh. Porter was later charged with, and pled not guilty to, misdemeanor battery as a result of the incident. 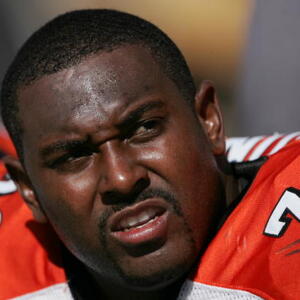