How much is Le'Veon Bell Worth?

Le'Veon Bell net worth and salary: Le'Veon Bell is an American professional football player who has a net worth of $12 million. Le'Veon Bell was born in Reynoldsburg, Ohio in February 1992. He is a running back who also played basketball and ran track at Groveport Madison High School. Bell played college football at Michigan State. He won the Big Ten championship in 2010 and was a first-team All-American and first-team All-Big Ten in 2012. Le'Veon Bell was drafted #48 by the Pittsburgh Steelers in the 2013 NFL Draft and played his entire career with the Steelers through the 2017 season. He was selected to the Pro Bowl in 2014, 2016, and 2017. Bell was a First-team All-Pro selection in 2014 and 2017 and a second-team All-Pro in 2017. In 2018 he turned down a two year deal for $30 million. Pittsburgh put a franchise tag on him worth $14.5 million be Bell refused to sign it and held out for a better contract. Le'Veon didn't show up for pre-season practice or opening day. Every week that went by, he was giving up millions of dollars. He had until 1pm on November 13 to sign his franchise tag but ultimately allowed that deadline to pass. He therefore gave up $14.5 million holding out for a larger deal.

Le'Veon Bell Jets Contract: Le'Veon's patience was arguably worth it because in March 2019 he signed a four-year $52 million contract that could max-out at $61 million with various incentives. Perhaps most importantly for Le'Veon, the contract comes with $25 million guaranteed. 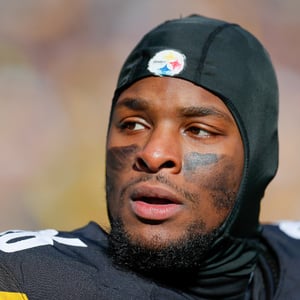