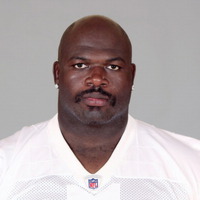 Leonard Davis Net Worth: Leonard Davis is an American football player who has a net worth of $25.4 Million. Born Leonard Barnett Davis on September 5, 1978, in Wortham, Texas, he has mostly played as a guard in his more than a decade-long NFL career. Attending the University of Texas at Austin on an athletic scholarship, Davis played for the Texas Longhorns football team and was recognized as an All-American. After his senior season, he got drafted as the second pick overall by the Arizona Cardinals in the 2001 NFL Draft. Ever since, he has played professionally for the Arizona Cardinals, Dallas Cowboys, Detroit Lions and San Francisco 49ers. As of today, he is a free agent. Making his debut with the Arizona Cardinals, he played guard his first three years in the NFL. It was in the 2004 that he was moved from guard to left tackle, where he remained playing in 15 games. Davis split ways with the Cardinals in 2006, and in 2007, he signed with the Dallas Cowboys for a seven year, $49.6 million contract. Once he moved to the Dallas, he also got back to the guard position. 2007 also saw his excellent game as he made the Pro Bowl for the first time in his career. What's more, he was the one to make the All-Pro second team along with ex-teammate Flozell Adams. But on the other hand, Davis was the 5th most penalized player in the NFL with 42. The Cowboys had to release him in July 2011, due to his declining play. Spending 2011 with the Detroit Lions and the following year with the San Francisco 49ers, he eventually became a free agent. Off the field, Leonard Davis is also the bassist in the heavy metal band Free Reign.