LeGarrette Blount net worth and salary: LeGarrette Blount is an American professional football player who has a net worth of $7 million. LeGarrette Blount was born in Madison, Florida in December 1986. Blount is a running back who played at Perry Taylor County High School where he ran for 1,000 yards three times. He played for East Mississippi Community College for two years and then finished his college career with the Oregon Ducks. In 2007 he was a Junior College All-American and in 2010 he won the Rose Bowl with Oregon. He was suspended for punching a Boise State player and has been no stranger to off the field issues. Blount went undrafted but signed a free agent contract with the Tennessee Titans where he played on the practice squad. He played for the Tampa Bay Buccaneers from 2010 to 2012. In 2013 Blount was traded to the New England Patriots. He signed a two year deal with the Pittsburgh Steelers in 2014 but was released due to an arrest for marijuana possession. In November 2014 he was claimed off waivers by the Patriots. Blount was named NFL Offensive Rookie of the Month in December 2010 and is a two time FedEx Air & Ground NFL Player of the Week. He won the AFC Championship with the Patriots in 2014. 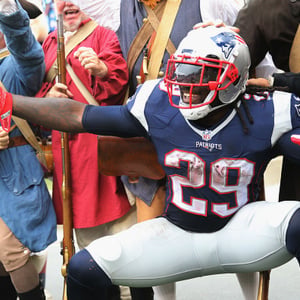