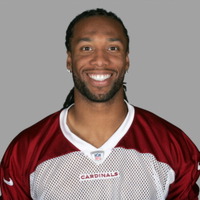 Larry Fitzgerald net worth and salary: Larry Fitzgerald is an American professional football player who has a net worth of $50 million. Larry Fitzgerald has earned his net worth as wide receiver in the National Football League. He was born in Minneapolis, Minnesota on August 31, 1983, his father Larry Fitzgerald Sr., is a sportswriter for the Minnesota Spokesman-Recorder. Larry Fitzgerald Sr. was believed to be the first reporter to cover his own son in a Super Bowl, at Super Bowl XLIII. Larry lost his mother Carol in 2003; his younger brother Marcus is an American football wide receiver for the Sacramento Mountain Lions of the United Football League. Fitzgerald currently ranks fourth all-time in league history in receiving yards per game for a career. He attended the University of Pittsburgh; he was also one of the best wide receivers in college football. He won several awards in 2003 including; the Walter Camp Award for best player of the year in the NCAA and second the Chic Harley Award giving by the Touchdown Club of Columbus. He was drafted in the 2004 NFL Draft third overall by the Arizona Cardinals, the coach Dennis Green already knew Fitzgerald from his time as a Vikings ball boy. Fitzgerald tied an NFL record at the NFC Championship for the 2008 NFL season, with three touchdown receptions in a playoff game. On August 20th, 2011 he signed an 8-year $120 million contract with the Cardinals making him tied with Richard Seymour as the 5th highest paid player in the NFL. He has a son with former Oakland Raiders cheerleader Angela Nazario. Fitzgerald was featured on the cover of the EA Sports video game called NCAAF 2005 and also on the cover of Madden 2010. Fitzgerald was also honored as MVP at the 2009 Pro Bowl.