Larry Csonka net worth: Larry Csonka is a retired American professional football player who has a net worth of $2 million. Larry Csonka was born in Stow, Ohio in December 1946. He was the starting tailback for the Stow High School Bulldogs and won the Metropolitan League of the Akron, Ohio area championship. Larry played college football at Syracuse and became a fullback after playing middle linebacker. He was named an All-American and established many school rushing records. Csonka was enshrined in the College Football Hall of Fame in 1989. Csonka was drafted #8 by the American Football League's Miami Dolphins in the 1968 Common Draft. He signed a three year deal worth just over $100,000. Csonka played for the Dolphins from 1968 to 1974. He won two Super Bowl Champions for the Dolphins in 1973 and 1974 and was a part of the undefeated Miami Dolphins team in 1972. He went on to play for the Memphis Southern in the WFL in 1975 before joining the New York Giants from 1976 to 1978 and finishing his career back with the Dolphins in 1979. During his career Csonka was selected to the Pro Bowl five times. He was a two time AP First-Team All-Pro and an AP Second-Team All Pro. Csonka also won three AFC Championships and was named the Super Bowl MVP of Super Bowl VIII in 1974. He was named the PFW NFL Comeback Player of the Year in 1979. Csonka's #39 has been retired by the Miami Dolphins. He was inducted into the Pro Football Hall of Fame in 1987. After retiring he has worked on television and as a motivational speaker. Starting in 2017 Csonka had a recurring role on the TV series Ballers. 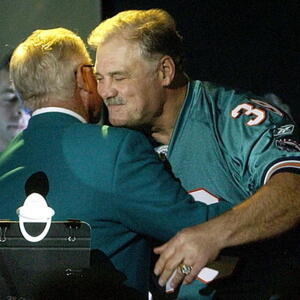