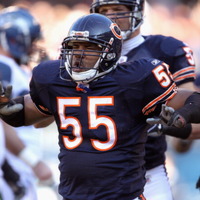 Lance Briggs Net Worth: Lance Briggs is an American professional football player who has a net worth of $12 million. Born in 1980 in Elk Grove, California, Lance Briggs played college football for the University of Arizona Wildcats, where he earned first-team All Pac 10 Conference honors twice. The Chicago Bears drafted Briggs with the 68th overall pick during the third round of the 2003 NFL Draft. As of midway through the 2014 season, Briggs has played every game of his decade-plus long career with the Bears. The six-foot-one, 244-pound linebacker is a seven-time Pro Bowl player (2005-2011) and a three-time All-Pro (2005-2006, 2009). He was part of the Bears' 2006 NFC Championship winning team that eventually lost to Peyton Manning and the Indianapolis Colts in the Super Bowl. Through the end of the 2013 season, Briggs has amassed 1,286 career tackles, 14 quarterback sacks, 16 interceptions, and 18 forced fumbles. He has missed just three starts in his pro career to date and is the first linebacker in NFL history to record a pick six in his first three campaigns. Briggs is a self-described commentator, philanthropist, cooking enthusiast, and comic book writer. He holds several football camps across the United States for kids every year.