LaMichael James net worth: LaMichael James is an American professional football player who plays running back for the San Francisco 49ers and who has a net worth of $2 million. LaMichael James was born in New Boston, Texas where he was raised by his maternal grandmother in Texarkana, Texas. His father died before he and his mother was in and out of his life. He attended Liberty-Eylau High School in Texarkana, Texas where he was a standout running back. His grandmother died when he was a junior in high school after which he chose to live by himself in their home until he graduated. LaMichael James played college football under Chip Kelly at the University of Oregon from 2009-2011 where he garnered such honors of Pac-10 Offensive Freshman of the Year in 2009, First-team All Pac-10, Doak Walker Award, Unanimous All-American, and NCAA rushing leader with 1.731 yards in 2010. He finished third in the Heisman Trophy voting in 2010. LaMichael James was the MVP of the Pac-12 Championship Game in 2011, and is the career rushing leader for the Oregon Ducks. LaMichael James was selected in the second round of the 2012 NFL Draft with the 61st overall pick by the San Francisco 49ers. LaMichael James saw his first NFL action during week 14 of the 2012-2013 season. LaMichael James scored his first career touchdown during the 2012 NFC Championship Game versus the Atlanta Falcons. 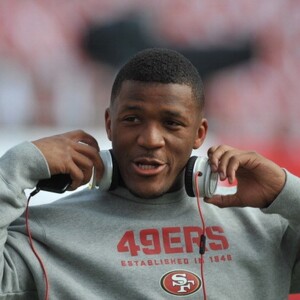