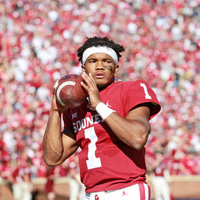 What Is Kyler Murray's Net Worth and Salary?

Kyler Murray is an American professional football quarterback who has a net worth of $40 million. Murray was named Gatorade Football Player of the Year and the "USA Today" Offensive Player of the Year while playing for Allen High School, then he played for Texas A&M and the University of Oklahoma and won the Heisman Trophy and Davey O'Brien Award. Kyler was also named Associated Press College Football Player of the Year and Big 12 Offensive Player of the Year, and he was the first pick in the 2019 NFL Draft and the ninth pick in the 2018 Major League Baseball Draft. Though he initially signed with the MLB team the Oakland Athletics, he later turned down a contract that included a $4.66 million signing bonus and committed to the NFL team the Arizona Cardinals instead. Murray set numerous Cardinals rookie quarterback records and was named NFL Offensive Rookie of the Year in 2019. In 2021, Kyler signed with the esports and gaming organization FaZe Clan.

In May 2019, Murray agreed to a $35 million deal with the Cardinals that came with a $23 million signing bonus. In July 2022, he signed a five-year contract extension with the Cardinals worth $230.5 million. The deal reportedly includes $160 million in guaranteed money. The average annual value of the deal is $46.1 million, which at the time made him the second highest-paid person in the NFL behind Aaron Rodgers' $50.3 million.

Kyler Murray was born Kyler Cole Murray on August 7, 1997, in Bedford, Texas. He is the son of Misun Henderson and former Texas A&M quarterback Kevin Murray, and he is a third-generation Korean American. His uncle, Calvin Murray, played baseball for the Chicago Cubs, San Francisco Giants, and Texas Rangers, and his cousin, Devin Duvernay, plays football for the Baltimore Ravens. Kyler attended Allen High School, where he was named Gatorade Football Player of the Year as a senior and Mr. Texas Football twice. As of this writing, no other player has earned the Mr. Texas Football title more than once. During Murray's time at Allen High, the football team won three state championships and 43 consecutive games. His high school career ended with a 42–0 record, and ESPN, 247Sports, and Scout.com named Kyler a five-star recruit. Murray played baseball for the school as well (second baseman and shortstop) and was chosen for the Under Armour All-America Football Game and the Under Armour All-America Baseball Game, becoming the first player to be selected for both. In May 2014, he committed to his father's alma mater, Texas A&M University, to play both football and baseball. 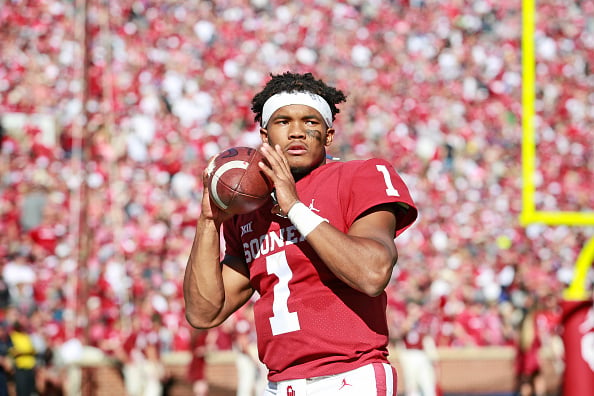 Though Murray was considered a top prospect for 2015's Major League Baseball draft, he opted out after he made the decision to attend Texas A&M. Before his freshman season, he and Kyle Allen competed for the starting quarterback position, and Allen was chosen. After the team lost two consecutive games, Kyler got his chance at the starting quarterback position, and in his first game as a starter, he became one of only two Southeastern Conference quarterbacks in the past two decades to gain more than 100 yards passing and rushing in their first career start, including both a passing and rushing touchdown. After starting in two more games, the team sidelined Murray and gave the starting quarterback position back to Allen. In December 2015, Kyler announced that he had decided to transfer to the University of Oklahoma. Due to the NCAA's transfer rules, he had to sit out the 2016 season. In 2017, Murray was the backup quarterback for the Sooners, and he started in the November 25th game after starting quarterback Baker Mayfield was subjected to disciplinary actions regarding the previous game. Kyler was the team's starting quarterback during the 2018 season, and he was honored with the Heisman Trophy at the end of the year. Murray was instrumental in the team making it to the College Football Playoff and Big 12 Championship. He also played on the Sooners baseball team as a left fielder and centerfielder.

Kyler chose the NFL Draft over his senior year of college, and he was the first player selected. In May 2019, he signed a four-year contract with the Arizona Cardinals, and his NFL debut took place in a September 8th game against the Detroit Lions. Murray was named NFC Offensive Player of the Week after a Week 6 game against the Atlanta Falcons, and his performance that season earned him the AP NFL Offensive Rookie of the Year Award and a spot as a Pro Bowl Alternate. Kyler was named NFC Offensive Player of the Week twice in October 2020 and again in December, and he ended the season with 26 touchdowns and nearly 4,000 passing yards. He was selected for the Pro Bowl, but it was cancelled because of the COVID-19 pandemic. However, a virtual exhibition game was held via the "Madden 21" video game, and after Murray won, he was named "Madden NFL 21" Pro Bowl MVP. During the 2021 season, Kyler was named NFC Offensive Player of the Week in September, and in October, he injured his ankle and had to sit the game out for three weeks. Murray was selected for the Pro Bowl again after the 2021 season ended, and in July 2022, he signed a five-year contract extension with the Cardinals.

Kyler enjoys playing chess and joined the chess club in elementary school, regularly winning tournaments against his fellow members. He told ESPN.com in 2019, "Most athletes probably aren't going to be that good at chess, so we were coming in, beating the guys that you would call — I don't call them nerds, but the guys that are supposed to be smarter than us. So it was kind of funny to see us go to the chess club and run it." He also stated in the interview, "Obviously, in football you can study somebody, but at the same time, once you get out there, I think there's just a natural kind of feel for where you think guys might be or where they're going to go and knowing beforehand what's going to happen. It's just like chess." In August 2022, Cardinals coach Kliff Kingsbury announced that Murray had tested positive for COVID-19 and was feeling "really poor with cold symptoms."

Murray was named Mr. Texas Football in 2013 and 2014, AP College Football Player of the Year and Big 12 Offensive Player of the Year in 2018, and NFL Offensive Rookie of the Year in 2019. In 2018, he won the Manning Award, Davey O'Brien Award, and Heisman Trophy, and he was named to the First-team All-Big 12 and First-team All-American. Kyler was chosen for the PFWA All-Rookie Team in 2019 and the Pro Bowl in 2020 and 2021. Murray has set several Cardinals records, including most games started by a rookie quarterback (16), highest completion percentage by a rookie (64.4%), most passing touchdowns by a rookie (20), most rushing yards by a quarterback in a career (1,786), and highest completion percentage in a career (66.9%).