Kyle Orton is a former American football quarterback for the Kansas City Chiefs of the NFL and has a net worth $14 million and an annual salary of $7 million. Kyle Orton earned his net worth as a professional football player. He attended Southeast Polk High School in Runnells, Iowa, where he also participated in basketball, tennis, and track and field.

He wore uniform No. 18 in honor of former Nebraska Cornhuskers' quarterback Brook Berringer who died in a plane crash in 1996. He was injured on his first and only pass attempt after entering the Chiefs win over the Bears in the second quarter. In 2004, he was the preseason third-team "All-American" quarterback, behind USC's Matt Leinart and Oklahoma's Jason White. In the 2005 NFL season, he was rushed into the Bears starting lineup as a rookie. He started 15 games of the season, however was replaced by Grossman after halftime during the Bears' Week 15 victory against the Atlanta Falcons. Overall, the Bears had a record of 10-5 in games that he started. He didn't play at all in 2006, and sparingly in 2007. In 2008, he regained his starting job from Grossman. In 2009, he started his Broncos career well, winning his first six games. The Bears head coach Lovie Smith named Orton the team's starting QB for the 2008 season. In 2008 the Bears and Orton agreed to a one-year contract extension running through the 2009 season. In 2008, he led the Bears to a 29-13 victory over the Indianapolis Colts in the first regular season game of the season. In 2009, the Bears traded him to the Denver Broncos for Pro Bowl quarterback Jay Cutler. He was named the Broncos starting quarterback for 2010. He signed a one-year contract extension through the 2011 season. Later, after several injuries, he was released and played his last years with the Dallas Cowboys and the Buffalo Bills. He retired in 2014. Kyle Orton was born on November 14, 1982 in Iowa. 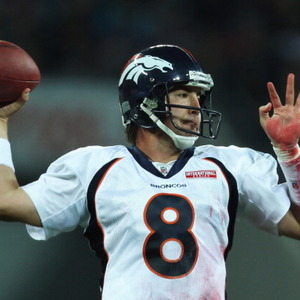