What is Kurt Warner's Net Worth, Salary and Career Earnings?

Kurt Warner is a retired American football quarterback who has a net worth of $30 million. He is probably best remembered for his activities with the St. Louis Rams and the Arizona Cardinals. A true underdog, Warner began his career as an undrafted free agent before rising through the ranks and becoming a two-time MVP winner. He also won the Super Bowl MVP Award. His story is considered one of the most inspiring and endearing in NFL history.

Warner started off by playing college ball with Northern Iowa for three years. He then spent four years in limbo as no team wanted to sign him. He was then signed by the Green Bay Packers in 1994 only to be released before the regular season. After a stint in the Arena Football League, Kurt finally had his chance after landing a spot with the Rams in 1998. Initially starting out as a backup quarterback, he was given a starting role in the following season and led the team to their first Super Bowl title. He continued to reach a high level of play throughout the rest of his career, which also saw him reach the Super Bowl in 2008 with the Cardinals.

His classification as an undrafted player makes him one of the NFL's greatest anomalies. To this date, he is the only undrafted player to win both the NFL MVP Award and the Super Bowl MVP Award. He is also the only undrafted quarterback in history to lead his team to a Super Bowl victory. No other quarterback has ever done this within their first year as a starter. In 2017, Warner was inducted into the Pro Football Hall of Fame and the Arena Football Hall of Fame, the only player to ever achieve both honors.

During his NFL career Kurt earned a little more than $60 million in salary. He earned millions more from endorsements.

Kurtis Eugene Warner was born on June 22nd of 1971 in Burlington, Iowa. He exhibited potential as a young football star on his high school team in Cedar Rapids. After graduating in 1989, he attended the University of Iowa and played for the Panthers. He was their third-string quarterback until his senior year. After gaining a starting position, he won the Offensive Player of the Year Award from the Gateway Conference.

Warner's NFL career did not get off to a flying start. He went undrafted in the 1994 Draft. He was then released by the Green Bay Packers after being invited to their training camp. Kurt's failure to sign with a team saw him accepting a job at a grocery store in Cedar Falls for $5.50 per hour. However, he continued to involve himself with professional football, becoming a graduate assistant coach at Northern Iowa. In 1995, he signed with the Arena Football League to play with the Iowa Barnstormers. He quickly became one of the league's biggest stars, leading Iowa to two consecutive Arena Bowl appearances.

This success seemed to grab the attention of the St. Louis Rams, who signed Warner. Kurt then played briefly in NFL Europe before relocating back to the United States. Much like his initial years at Northern Iowa, Warner found himself acting as the third-string quarterback. Due to a lineup shift after the 1999 NFL Expansion Draft, Warner suddenly found himself as the second-string quarterback behind Trent Green. Green was then sidelined with a torn ACL, giving Warner the starting position that he'd been waiting for. 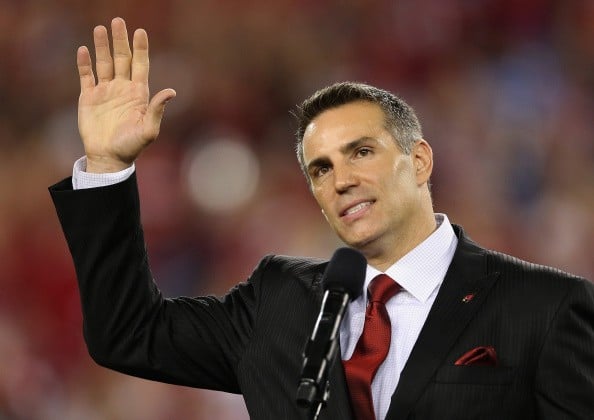 His performance shocked the entire league. He ended with 4,353 throwing yards, 40 touchdown passes, and a completion rate of 65.1%. The Rams' offense earned the nickname "The Greatest Show on Turf," and they charged to a Super Bowl victory that year. The victory came after Kurt threw a game-winning, 73-yard touchdown pass in the dying moments of the final.

In 2000, Warner signed a $47-million contract with the Rams. Unfortunately, Warner broke his hand in the middle of the season, but Trent Green stepped in and the two helped the Rams rack up the most passing yards in NFL history with 5,232 yards. In 2001, Kurt led the team to the Super Bowl once more but failed to win the title. However, he did manage to win his second NFL MVP Award that season.

Warner's form began to dip at the start of the 2002 season. He was eventually replaced by Marc Bulger as the starting quarterback in 2003. Kurt quickly signed a new contract with the New York Giants after being released by St. Louis. His contract was worth $3 million for one year. However, Warner's form failed to improve and he was eventually replaced by a young Eli Manning.

In 2005, he switched allegiances once again, this time signing with the Arizona Cardinals. The one-year contract was worth $4 million, and coach Dennis Green expressed full faith in his new quarterback. Warner was given the starting position, but he was quickly replaced after three lackluster performances. However, he was put back into the starting lineup and managed to defeat his old team with three touchdown passes and a quarterback rating of 115.9, beating the Rams 38-28.

This encouraged the Cardinals to extend his contract by three years with a salary of $18 million. His performances were solid throughout the next few years, and in 2008 he led the Cardinals to a Super Bowl appearance. After a bad hit in 2009, Warner officially retired in 2010.

In 2013, it was reported that Warner had sold a home in Paradise Valley. The suburb in Phoenix is quite affluent, and he managed to offload the mansion for $2.5 million. Featuring over 11,000 square feet of living space and seven bedrooms, the residence is quite luxurious. Highlight include a modern spiral staircase and a pool with a waterfall. 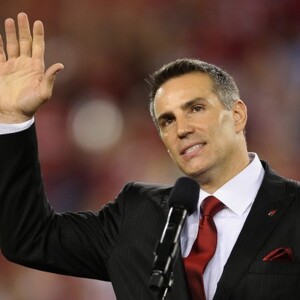