Kris Jenkins Net Worth: Kris Jenkins is an American retired professional football player who has a net worth of $14 million. Born in Ypsilanti, Michigan, in 1979, Kris Jenkins played defensive tackle at the University of Maryland. He was a second-team All-ACC player as a season and recorded close to ten sacks during his college career. The Carolina Panthers chose Jenkins with the 44th overall pick in the second round of the 2001 NFL Draft. Jenkins played with the Panthers from 2001 until 2004, though his career was plagued with injuries, including an ACL tear and a shoulder injury. He was traded to the New York Jets prior to the start of the 2008 season. Jenkins tore his ACL a second time in 2009 and a third time in 2010. He was released by the Jets following the end of the 2010 season. During the summer of 2011, Jenkins announced that he planned to retire from playing professional football. He finished his career as a four-time Pro Bowler and three-time first-team All Pro. He won the NFC Championship in 2003. He tallied 279 tackles and 24 sacks during his multi-year career. Since his NFL retirement, Jenkins has taken work as a New York Jets analyst for SportsNet New York. 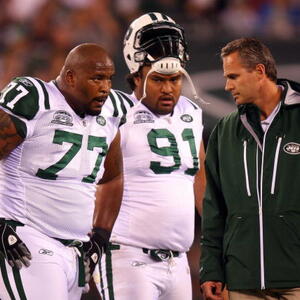