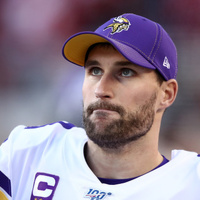 Kirk Cousins net worth and salary: Kirk Cousins is an American professional football player who has a net worth of $70 million. Kirk Cousins was born in Holland, Michigan in August 1988. He is a quarterback who played at Holland Christian High School. Cousins played his college football at Michigan State where he was named Second Team All-Big Ten. He was drafted #102 by the Washington Redskins in the 2012 NFL Draft and has played his entire NFL career for the Redskins. In 2012 Cousins was named the NFL Pepsi Rookie of the Week and the Fedex Clutch Player of the Week. In 2015 he was the NFL completion percentage leader and a two time NFC Offensive Player of the Week. Cousins threw the 65th perfect game in NFL history in 2015 and also set a Washington Redskins franchise record for most completions in a game with 33 and in a season with 379. He also set a Redskins record for yardage in a season with 4,166 and was named the NFC Offensive Player of the Month in December 2015.