Khalil Mack net worth: Khalil Mack is an American professional football player who has a net worth of $30 million. Khalil Mack was born in Fort Pierce, Florida in February 1991. He is an outside linebacker who played at Fort Pierce Westwood High School. Mack played his college football for Buffalo and was three time first-team All-MAC.

He was a first-team All-American and MAC Defensive Player of the Year in 2013. Khalil Mack was drafted #5 overall by the Oakland Raiders in the 2014 NFL Draft. He played for the Raiders from 2014 to 2017 and joined the Chicago Bears in 2018. Mack was named to the PFWA All-Rookie Team in 2014. He won the Butkus Award in 2016 and 2018 and was the NFL Defensive Player of the Year in 2016. Khalil Mack was selected to the Pro Bowl in his first four seasons and is a three time first-team All-Pro. In 2018 he was traded to the Bears and signed a six year deal for $141 million with $90 million guaranteed which made him the highest paid defender in NFL history. 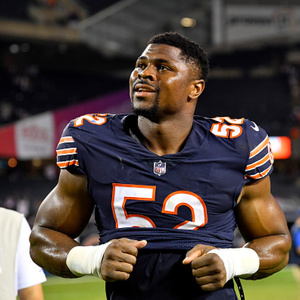