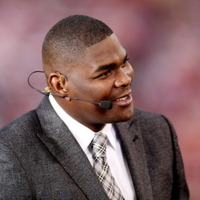 Keyshawn Johnson net worth and salary: Keyshawn Johnson is a former American former NFL player and current sports broadcaster who has a net worth of $20 million. Keyshawn Johnson played eleven seasons as a wide receiver in the NFL and currently works as a broadcaster on ESPN. Keyshawn Johnson was born in Los Angeles, California in July 1972. He did not start playing football Wide Receiver until his senior year at Miller Dorsey High School, and then played for two years at West Los Angeles College. He transferred to the University of Southern California where he played in 1994 and 1995. He was a Consensus All-American and won the Pop Warner Trophy in 1995. In 2008, Keyshawn was inducted into the Rose Bowl Hall of Fame. He appeared on the show Coach while in college. Johnson was the #1 overall pick by the New York Jets in the 1996 NFL Draft. He played for the Jets from 1996 to 1999 and then was traded to the Tampa Bay Buccaneers where he played until 2003. He was then traded to the Dallas Cowboys where he played until 2005 before signing with the Carolina Panthers and finishing his career in 2006. Johnson won a Super Bowl Championship with the Tampa Bay Buccaneers in 2003. He was a three time Pro Bowl selection and was the Pro Bowl Co-MVP in 1998. He retired after the 2006 season. In 2009, Keyshawn started working for ESPN. He works on Sunday NFL Countdown and Monday Night Countdown. He is also credit with inventing the segment "C'mon Man!". He was the 1st contestant eliminated in season 17 of Dancing with the Stars; he is paired with professional dancer Sharna Burgess.