Kevin Williams Net Worth: Kevin Williams is an American professional football player who has a net worth of $10 million. Kevin Williams was born in Arkadelphia, Arkansas in 1980, and played college football for the Oklahoma State University Cowboys, where he appeared in more than 40 career games with 160 tackles and 18.5 quarterback sacks.

He helped guide the Cowboys to their second bowl game in 14 years at the time. The Minnesota Vikings drafted the six-foot-five, 311-pound defensive tackle with the ninth overall pick during the first round of the 2003 NFL Draft. Williams went on to play with the Vikings for the next decade before signing a one-year, roughly two-million-dollar free agent contract with the then-defending Super Bowl Champion Seattle Seahawks. Williams appeared in six Pro Bowls during his time with the Vikings (2004, 2006-2010) and earned five All-Pro honors (2004, 2006-2009). He was honored as a member of the NFL 2000s All-Decade Team. Through the conclusion of the 2013 season, Williams racked up 464 career tackles, 60 quarterback sacks, five interceptions, and seven forced fumbles. Toward the end of the 2008 season, Williams made headlines for a four-game suspension after he was found to be using a diuretic that can help to hide steroid use. Williams claimed the diuretic was in his body because of a weight loss supplement he had been taking at the time; Williams and his fellow player Pat Williams, appealed the league's suspension to a federal court in Minnesota, which found in favor of the players. In 2011, the case was resolved and Williams received a two-game suspension. 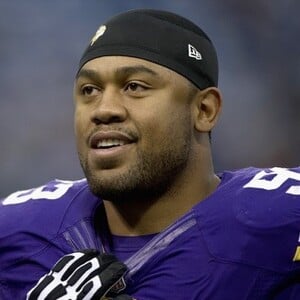