Kellen Davis net worth: Kellen Davis is an American football player who has a net worth of $8 Million. He currently plays tight end for the Seattle Seahawks. Kellen Davis was born on October 11, 1985 in Adrian Michigan. He played college football at Michigan State, appearing in 43 games over his career.

He ended his senior year with All Big-Ten honorable mentions and finished his career with 60 catches, 789 yards and nine touchdowns. Kellen Davis was selected by the Chicago Bears with the 158th pick (5th round) of the 2008 NFL Draft. He played in all 48 games his first three seasons, but was limited mostly to backup duties, starting in just five games. After Greg Olsen was traded in 2011, however, Davis became the Bears' starting tight end. During the 2011 season, Davis had 18 catches for 206 yards and five touchdowns. In the 2012 season, he struggled mightily with drops and finished with just 19 catches for 229 yards and two scores. In early 2013, he was released by the Bears. Davis later signed with the Browns but was released before the season started. In September 2013 he signed with the Seahawks, and caught three passes for 32 yards and a touchdown during the 2013 season. 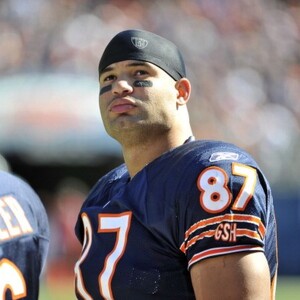