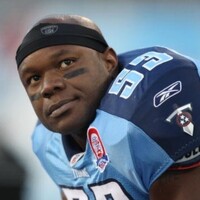 Keith Bulluck Net Worth: Keith Bulluck is a former American football player who has a net worth of $12.75 Million. Born Keith J. Bulluck on April 4, 1977, in Suffern, New York, he played as linebacker for eleven seasons in the National Football League (NFL). While studying at the Syracuse University, he played college football as strong safety, outside linebacker and middle linebacker. In his college career, Bulluck completed 375 tackles, six sacks, three interceptions, three forced fumbles and six fumble recoveries. Shortly after, he was selected 30th overall by the Tennessee Titans in the 2000 NFL Draft. He spent most of his pro career with the Titans, ten years in total, which included a Pro Bowl selection in 2003. Also, he recorded a Titans-record five interceptions for a linebacker in 2007. It was 2010 that he played for the New York Giants and he had the following year off, announcing his retirement on January 25, 2012.