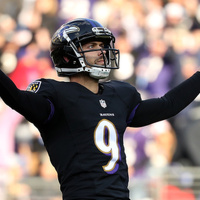 Justin Tucker net worth and salary: Justin Tucker is an American professional football player at the placekicker position for the NFL's Baltimore Ravens who has a net worth of $5 million. Justin Tucker was born in 1989 in Houston, Texas and grew up in Austin, Texas where he played football for Westlake High School and appeared in the 2008 U.S. Army All-American Bowl. Justin Tucker attended the University of Texas in Austin where he played football for the Longhorns. Justin Tucker was instrumental in the Longhorn's victory over rival Texas A&M University in the 118th playing of the rivalry game. He kicked the game winning field goal as time expired; giving the then ranked #25 Texas Longhorns the victory, 27-25. Justin Tucker entered the 2012 NFL Draft but was not selected by any of the NFL's 32 teams. The Baltimore Ravens signed him as an undrafted free agent on May 29, 2012. After an impressive showing in preseason games, Justin Tucker earned the starting placekicker job for the Ravens over veteran Billy Cundiff. Justin Tucker has been the AFC Special Teams Player of the Week three times in 2013, the AFC Special Teams Player of the Month in November 2013, as well as a member of the Baltimore Ravens team that won the 2012 AFC Championship and Super Bowl XLVII.