Justin Houston net worth: Justin Houston is an American professional football player who has a net worth of $30 million. Justin Houston was born in Statesboro, Georgia in January 1989. He is an outside linebacker who was a two-time All-Region selection and All-State honorable mention at Statesboro High School where he won the State Championship.

Houston played his college football at the University of Georgia where he was named First-team All-SEC and a First-team All-American in 2010. He was drafted #70 by the Kansas City Chiefs in the 2011 NFL Draft and has played his entire career in Kanas City. Houston won the Deacon Jones Award, was the NFL sacks leader, and was a first-team All-Pro in 2014. He is a three time Pro Bowler from 2012 to 2014. Houston holds the Kansas City Chiefs single season sack record with 22 in 2014. He has been ranked in the Top 100 Players in the NFL from 2013 to 2015, finishing at #27 in 2015. In 2015 Houston signed a six year deal with the Chiefs for $101 million including $52.5 million guaranteed. 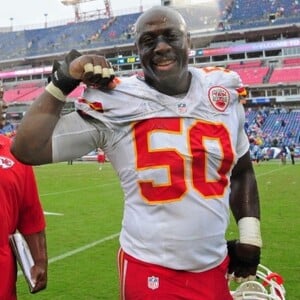