Justin Blackmon net worth: Justin Blackmon is an American professional football player who has a net worth of $500 thousand. Justin Blackmon was born in Oceanside, California in January 1990. He is a wide receiver who was a SuperPrep All-American at Plainview High School. Blackmon played his college football at Oklahoma State where he was named the Big 12 Offensive Player of the Year in 2010 and the Fiesta Bowl MVP in 2012. Blackmon was a two time Biletnikoff Award winner, two time Unanimous All-American, two time First-team All-Big 12, and two time Paul Warfield trophy winner. Blackmon was drafted #5 by the Jacksonville Jaguars in the 2012 NFL Draft. He has played his entire career with the Jaguars. He was suspended twice in the 2013 season and is currently under indefinite suspension, unlikely to play in 2015. In October 2014 he checked into a 90-day program. 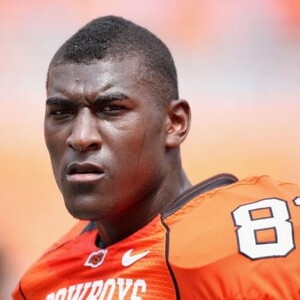