Julio Jones net worth and salary: Julio Jones is an American professional football player who has a net worth of $50 million. His September 2019 three-year $66 million deal with the Atlanta Falcons made him one of the highest paid athletes in the world. The contract came with a $25 million signing bonus and was fully guaranteed.

Julio Jones was born in Foley, Alabama in February 1989. He is a wide receiver who was named Gatorade T&F Athlete of the Year in Alabama and was a USA Today High School All-American at Foley High School. Jones played his college football for the University of Alabama where he won a BCS National Championship in 2010 and an SEC Championship in 2009. He was named Second-team All-SEC in 2008 and First-team All-SEC in 2010. Jones was drafted #6 by the Atlanta Falcons in the 2010 NFL Draft and has played his entire NFL Career for the Falcons. He was an NFL Offensive Rookie of the Month in 2011. Jones was named to the Pro Bowl in 2012 and 2014. He was the NFC Receiving Yards Leader in 2014. He was ranked #13 in the Top 100 Players of 2015 and holds the Falcons All-time Single Season Record in Receiving Yards with 1,593. Jones signed a four year deal worth $16.2 million with Atlanta in 2011.

Contracts: In 2014 Julio signed a $71 million contract in that gave the Falcons a fifth-year option through the 2015 season. Out of $71 million, $47 million was guaranteed. In September 2019, Julio and the Falcons agreed to a three-year $66 million contract extension that keeps the receiver with the team through 2023. The contract is fully guaranteed and paid him $64 million at signing. It's the highest-amount guaranteed ever given to a wide receiver. As we mentioned previously, this deal also came with a $25 million signing bonus. 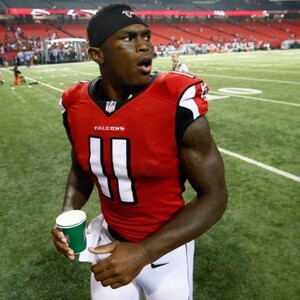