Julian Edelman net worth and salary: Julian Edelman is an American professional football player who has a net worth of $25 million. Julian Edelman was born in Redwood City, California in May 1986. Edelman is a wide receiver and punt returner who played quarterback at Woodside High School. He played his college football at Kent State University also as a quarterback and was named Kent State University Offensive Player of the Year and Second-team All-MAC in 2006. Edelman was drafted #232 by the New England Patriots in the 2009 NFL Draft and has played in New England his entire career. He became a free agent and re-signed a four year deal for $17 million in 2014. During his NFL career Edelman was named to the USA Today All-Joe Team in 2013. He has won two AFC Championships and a Super Bowl Championship in 2015 with the Patriots. Julian Edelman's last contract was a four-year $17.5 million deal. 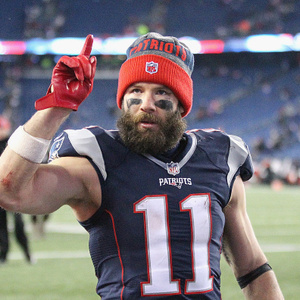