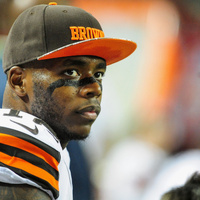 Josh Gordon net worth, salary and career earnings: Josh Gordon is an American professional football player who has a net worth of $3 million. Josh Gordon was born in Houston, Texas in April 1991. Gordon is a wide receiver who played for Lamar High School and was named first-team All-District 20-5A as a senior. He had a scholarship to play football for Baylor University but was suspended for being with teammate Willie Jefferson when police found marijuana in his car. Gordon later failed a drug test and was suspended indefinitely. He transferred to Utah and sat out the 2011 season. He was drafted in the second round of the 2012 Supplementary Draft by the Cleveland Browns and signed a four year deal worth $5.3 million. Gordon has played with the Browns his entire career and has set many records. In 2013 he made the Pro Bowl and was a first-team All-Pro as well as leading the NFL in receiving yards and being named Cleveland PFWA Player of the Year. Gordon is the only player in NFL history to have consecutive 200 yard receiving games during the regular season. He set a record for the most receiving yards in a four game span in NFL history and for most receiving yards in a single season in Browns history. Gordon also set records for most receiving yards in a single game in browns history and most receptions in a game in Browns history. He also holds the record for most 100 yard receiving games in a single season in Browns history. He was suspended for the first two games of the 2013 season for violating the NFL's substance abuse policy. He was suspended again for the entire 2014 season for another substance abuse policy violation but was reinstated late in the season only to be suspended for the final game by the Browns.