Joshua Patrick Allen was born on May 21, 1996 in Firebaugh, California. He grew up on a 3,000-acre cotton farm. Despite being a high school football standout, Josh could not get any attention from notable college football programs. He ended up enrolling at Reedley College, a junior college where one of the assistant coaches was married to his cousin. After one year he managed to transfer to the University of Wyoming.

Allen was hoping to be chosen in the 2017 NFL draft. He was not chosen so he returned to Wyoming. He returned to school, graduating in December 2017.

At the 2018 NFL draft Josh Allen was the seventh overall pick, chosen by The Buffalo Bills.

On July 25, 2017 Allen signed a fully-guaranteed four-year $21 million contract with The Bills. When he first joined the team, Allen had to compete for the starting position against AJ McCarron and Nathan Peterman. McCarron was soon traded to the Raiders and unfortunately Allen lost the starting gig to Peterman.

Nathan Peterman was benched in September 2018, at which point Josh was promoted to the starting position. Ahead of the start of the 2019 season, Josh was named team captain. In the 2020-21 season, Josh led The Bills to the AFC Championship. 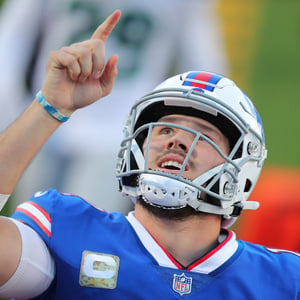