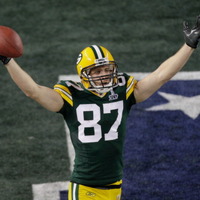 Jordy Nelson net worth: Jordy Nelson is an American professional football player who has a net worth of $25 million. Jordy Nelson was born in Manhattan, Kansas in May 1985. He was a wide receiver who played at Riley County High School and won a national AAU championship in the 400 meters when he was 10 years old. Nelson played his college football at Kansas State where he was a consensus All-American and first-team All-Big 12 in 2007. He was drafted #36 overall by the Green Bay Packers in the 2008 NFL Draft. Nelson played for the Packers from 2008 to 2017 and for the Oakland Raiders in 2018. He won a Super Bowl championship with Green Bay and was a Pro Bowl selection in 2014 when he was also named a second-team All-Pro. Nelson was named NFL Comeback Player of the Year in 2016 and won the Best Comeback Athlete ESPY Award in 2017. He was the NFL receiving touchdowns leader in 2016.