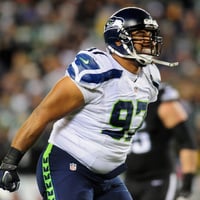 Jordan Hill net worth: Jordan Hill is an American football player who has a net worth of $9.6 Million. He currently plays defensive tackle for the Seattle Seahawks. Jordan Hill was born on February 8, 1991 in Harrisburg, Pennsylvania. Hill attended Steelton Highspire High School and earned all-state accolades while helping the school win a Class A state championship in both 2007 and 2008. Upon graduating, Hill initially signed with Rutgers, but committed to Penn State after receiving a scholarship offer from them. During his first two years with the Nittany Lions, Hill played sparingly, but did appear in 11 games his sophomore year. In 2011, as a junior, Hill recorded 59 tackles and 3.5 sacks. He earned an All-Big 10 honorable mention. He was also one of the most vocal supporters of coach Joe Paterno during the Penn State child abuse sex scandal. After his senior season, Hill entered the NFL Draft. He was chosen by the Seattle Seahawks with the 87th pick (third round) of the 2013 NFL Draft. He only appeared in four games for the Seahawks in 2013, compiling seven tackles and 1.5 sacks. He was a part of the Seahawks' team that won the NFC Championship and advanced to Super Bowl XLVIII.