Stewart played his college football at Oregon where he was named Second-Team All-Pac-10 in 2006 and First-Team All-Pac-10 in 2007. He was drafted #13 by the Carolina Panthers in the 2008 NFL Draft and has played his entire career for the Panthers. Stewart set the Carolina Panthers rookie rushing record with 836 yards. In 2015 he won the NFC Championship with Carolina and was a first time Pro Bowl selection as well as a Pro Football Focus All-Pro. Stewart signed a $14 million contract with Carolina in 2008 and a five year deal worth $37.8 million in 2012. 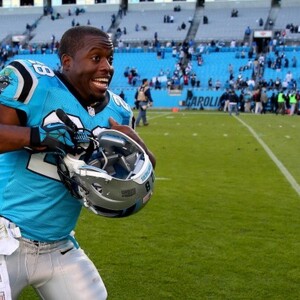