Jonathan Ogden Net Worth: Jonathan Ogden is an American former college and professional football player who has a net worth of $22.4 Million. Born Jonathan Phillip Ogden on July 31, 1974, in Washington, DC, he played as an offensive tackle in the National Football League (NFL) for twelve seasons. Ogden first had the chance to show his excellent athletic skills both in high school football and in track and field, while attending the St.

Albans School in Washington. A high school All-American in both football and track, he chose UCLA over the University of Florida because the former would let him also participate in track and field. There, he enjoyed a successful college football and was again recognized as an All-American. Being selected in the first round of the 1996 NFL Draft, he spent his entire professional career playing for the Baltimore Ravens. It was in 2001 that Ogden won a Super Bowl ring with the Ravens as they defeated the New York Giants 34-7 in Super Bowl XXXV. In a career that spanned 12 seasons, he was an eleven-time Pro Bowl selection and a nine-time All-Pro. Jonathan Ogden officially announced his retirement on June 12, 2008. Following his retirement, Ogden was honored to serve as the Ravens' Honorary Captain at Super Bowl XLVII, which saw his former teammates win their second world championship. The first player to spend his entire career as a Raven, Ogden was voted into the Pro Football Hall of Fame on February 2, 2013. 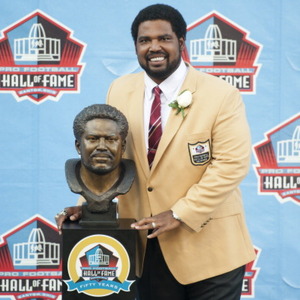