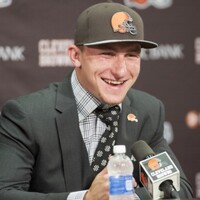 What is Johnny Manziel's Net Worth and Career Earnings?

Johnny Manziel is a retired American football player who has a net worth of $6 million. After winning the Heisman Trophy while at Texas A&M, Johnny entered the 2014 NFL draft. He ended up playing in the NFL from 2014 to 2015, spending his entire NFL career with the Cleveland Browns. Outside of the NFL he played for the Hamilton Tiger-Cats and the Montreal Alouettes in the CFL. Johnny is perhaps best-known for his numerous off-field controversies.

Between salary, signing bonus, and endorsements, Johnny Manziel earned $7 million during his rookie year. During that rookie year, he threw for a total of 175 passing yards with zero passing touchdowns and one rushing touchdown. On March 11, 2016, The Cleveland Browns cut Johnny after paying him $7,707,913 in salary. During his time on the team, Johnny threw seven touchdowns and seven interceptions.

Just before entering the NFL draft, when he was still projected to be a first-round pick with a long career, Johnny signed a multi-year, multi-million dollar endorsement deal with Nike. Under Armour and New Balance also submitted proposals to land Manziel. Unfortunately, two years later, in April 2016, Johnny was dropped by Nike and his agents in the wake of a string of off-field controversies.

Johnny had been projected to earn over $100 million in salary and endorsements had he submitted even a moderate performance during his time in the NFL.


Jonathan Paul Manziel was born in Tyler, Texas, on December 6, 1992. He is of Italian and Lebanese descent, and has a younger sister named Meri. Johnny's parents are highly successful, and wealthy, thanks to investments in the oil and natural gas industries.

Johnny Manziel's parents, Paul and Michelle Manziel, are oil tycoons who are reportedly worth tens of millions of dollars, perhaps as much as $50-100 million. Paul and Michelle Manziel met when they were working as bartenders. She went on to work in real estate and he went on to build homes and sell cars. However, the family is actually independently wealthy, due to Bobby Joe Manziel, Mr. Manziel's great-grandfather, who struck oil when he moved to Texas in the 1930s.

He played several sports growing up, including football, basketball, baseball, and golf, but chose to focus on football and baseball while he attended Tivy High School in Kerrville, Texas.

During his high school football career, he actually started out playing as a receiver his freshman year, only moving to the position of quarterback during the fourth game of his sophomore year. As quarterback, he quickly gained people's attention with his impressive states; during his senior year, he had 65.7% passing for 3,609 yards with 45 touchdowns and 5 interceptions. Some of his accolades he received include being named the San Antonio Express-News Offensive Player of the Year (twice), the National High School Coaches Association Senior Athlete of the Year in Football, and a Parade All-American. Many schools recruited him, such as Baylor, Colorado State, Iowa State, Louisiana Tech, Oregon Rice, Stanford, Tulsa, as well as Texas A&M. 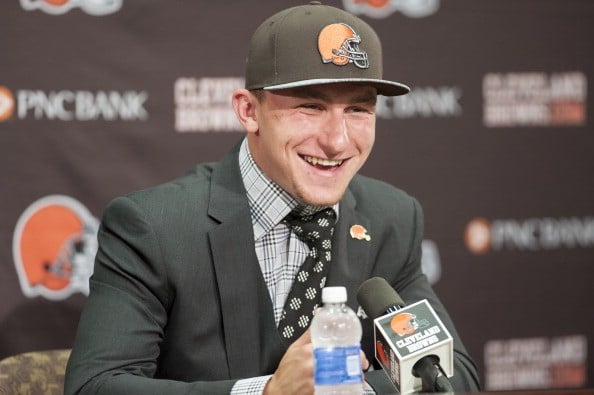 He chose to attend and play for Texas A&M, where he received an academic scholarship. Due to the departure of quarterback Ryan Tannehill for the NFL after the 2011 season, Texas A&M had a spot to fill. Manziel outperformed Jameill Showers and Matt Joeckel, earning the spot of starting quarterback. He started gaining attention when he broke Archie Manning's 43-year-old total offense record during a game against Arkansas, and he continued to perform well. After leading Texas A&M to a victory over top-ranked Alabama, Manziel began appearing on Heisman Watch lists. He broke records by becoming the first freshman (and only the fifth player ever) in NCAA history to pass for 3,000 and rush for 1,000 yards in a season. He made history again when he became the first freshman ever to win the Davey O'Brien Award and the Heisman Trophy. For his sophomore season at Texas A&M, he came in fifth place in the 2013 Heisman Trophy voting.

Manziel made the decision to leave college football, forego his junior season at Texas A&M, and enter the 2014 NFL Draft. He was projected to be a first-round pick, but concerns about his attitude remained, with many hesitant about him. On draft day, 21 teams (including the Cleveland Browns) passed over Manziel, but eventually a text he sent to Browns quarterbacks coach Dowell Loggains helped to convince head coach Mike Pettine to draft him as the 22nd overall pick.

Manziel only stayed with the Browns for two seasons, both plagued with difficulties. During his rookie season (2014), he was fined $12,000 by the NFL for a rude hand gesture he made in a preseason loss to the Washington Redskins, resulting in Brian Hoyer being named the starting quarterback for the opening regular-season game. Then, during the 2015 season, Manziel was demoted to third-string quarterback after videos of him partying emerged online. On March 11, 2016, the Cleveland Browns cut Manziel after paying him $7,707,913 in salary. During his time on the team, he threw 7 touchdowns and 7 interceptions.

He then spent two years out of football, a large part of it due to ongoing contract negotiations, before returning to the sport in 2018 when he signed a two-year contract with the Hamilton Tiger-Cats in the Canadian Football League (CFL). However, he only spent six weeks as a benchwarmer before he was traded to the Montreal Alouettes in July 2018. Eventually, the CFL cut ties with Manziel, and he was released by the Alouettes on orders from league officials.

Manziel attempted to return to professional football by joining the newly-established Alliance of American Football (AAF) in March 2019, where he was assigned to the Memphis Express team. However, the league filed for bankruptcy in April 2019, having not even completed a single season. As of April 2020, Manziel is not currently signed to any professional football team. 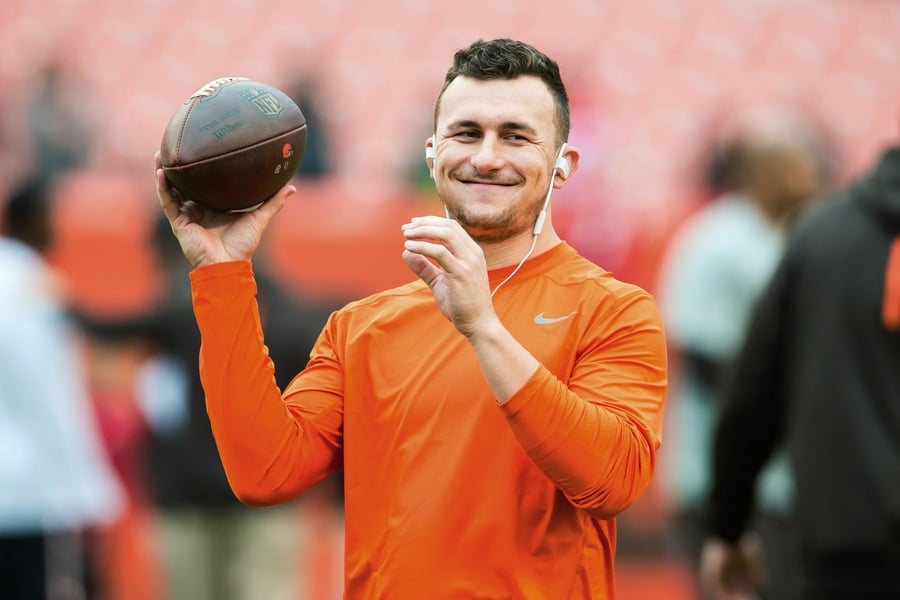 Manziel became engaged to Bre Tiesi in March 2017, and the two married in March 2018. However, the couple separated a mere year later.

Although a talented athlete on the field, Manziel's career has been marred by several controversies and run-ins with the law. His first arrest was in June 2012, before he even played his first college football game. Reportedly, one of his friends was in an altercation that Manziel tried to stop but got involved in, and then he presented a fake ID to police officers following the incident. Regardless, he was still named as the starting quarterback for Texas A&M University.

His troubling behavior continued throughout college and even into his time with the pros, drawing significant media attention. Incidents include getting kicked out of a University of Texas fraternity party, an NCAA investigation into allegedly accepting payments for autographs (which he was found not guilty of), being pulled over for fighting with then-girlfriend Colleen Crowley in the car, and a Dallas Police Department investigation in 2016 over domestic violence claims by Crowley (he was eventually indicted on misdemeanor assault charges). His antics off the field had serious repercussions, including leading to the Cleveland Browns cutting ties with him, losing his sponsorship deal with Nike, and having not one, but two different agents terminate him as a client.