John Riggins net worth and salary: John Riggins is a former American football player who has a net worth of $6 million dollars. Born in Seneca, Kansas on August 4, 1949, Riggins is best known for playing as a running back in the National Football League. He attended the University of Kansas and was drafted to the NFL as the sixth pick in Round 1.

He debuted in 1971 with the New York Jets, followed by the Washington Redskins from 1976 to 1979, and again from 1981 to 1985. He was inducted into the Pro Football Hall of Fame in 1992. In his professional career, Riggins stood at six feet tall and weighed 230 pounds. He was selected for the Pro Bowl in 1975, made AP First Team All-Pro in 1983, was the PFW NFL Comeback Player of the Year in 1978, was NFL MVP in 1983, is a Super Bowl champion as well as a Super Bowl MVP, made the NFL 1980s All-Decade Team, was a two-time Jets MVP for the years 1972 and 1975, was a two-time NFL leader in rushing touch downs in 1983 and 1984, is part of the 10,000 Rushing Yards Club, is one of the 80 Greatest Redskins, and was a Redskins Ring of Fame inductee in 1990. His NFL career statistics include 11,353 rushing yards, an average of 3.9, and a total of 104 touchdowns. As a college player for the University of Kansas, Riggins led his team to the Big Eight Conference as well as the 1969 Orange Bowl. Following his football career, Riggins dabbled in acting and can be seen on shows such as One Tree Hill, Guiding Light, and Law & Order: Criminal Intent. He currently lives in Cabin John, Maryland with his wife, Lisa Marie, and has six children. 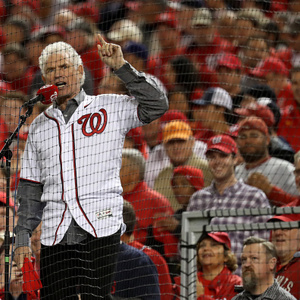