John Mobley Net Worth: John Mobley is a former professional football player who has a net worth of $8 million. Born in 1973 in Chester, Pennsylvania, John Mobley played college football at Kutztown University in his home state. The Denver Broncos selected him with the 15th overall pick in the 1996 NFL Draft, and he made his professional debut the same year.

Mobley spent his entire career with the Broncos before his 2003 retirement. He played in 105 games with 102 starts, racking up more than 600 tackles, ten sacks, and five interceptions. Mobley earned All-Pro honors during the 1997 season, which he finished with 132 tackles and four sacks. He was part of two Super Bowl-winning teams, claiming the championship in Super Bowl XXXII and XXXIII. In 2003, Mobley bruised his spinal column during an on-field collision with a teammate during a game and he was cut after the season. Once it became apparent that Mobley needed more time to heal, he re-signed a short contract with the Broncos to retire with the organization. Soon after, Mobley was found guilty of a DUI during the spring of 2004 and was sentenced to a year in jail, though that was later reduced to seven days. 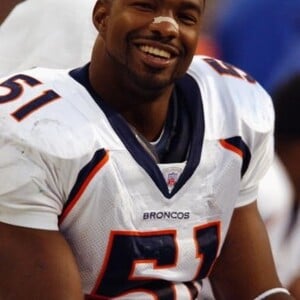