Joey Porter net worth: Joey Porter is a former American football player who has a net worth of $14 million. Joey Porter gained his net worth as a NFL linebacker, playing for Pittsburgh Steelers, Miami Dolphins and Arizona Cardinals before retiring from the game in 2011. Porter began his college career at Colorado State as an H-back and then a defensive end.

He was selected by the Pittsburgh Steelers for the 1999 NFL Draft. During his time with the Steelers, he was voted AFC Defensive player of the Year in 2000 for his record-breaking performance. He would remain with the team for seven seasons. In 2007, Porter was released from the Steelers, receiving a payment of $1 million bonus in lieu. Upon his release, Porter received a lot of interest from several teams. In the end, he signed a five year deal with Miami Dolphins, worth $32 million. During his time with the Dolphins, Porter was named the team captain and was recognized (along with Albert Haynesworth) as the second dirtiest defensive player in the league. The four-time Pro Bowl player was released from the team in March 2010, following a suspension from a game. Days after, he signed a deal worth $24 million with the Arizona Cardinals, in which during this time, he was arrest on suspicion of drunken driving and assaulting a police officer. Porter played his last game in 2011. In February 2014 Porter became a Defensive Assistant coach for the Steelers. 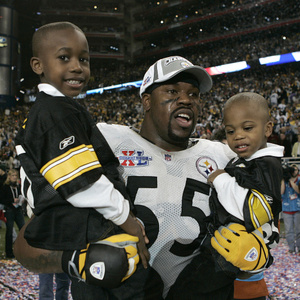