Joel Dreessen net worth: Joel Dreessen is a retired American football player who has a net worth of $6 million. Joel Dreessen was born on July 26, 1982 in Ida Grove, Iowa. He attended Fort Morgan High School, and led his team to the Colorado 3A State championship his junior year. Upon graduation, he enrolled at Colorado State University.

Joel Dreessen was the 198th pick (sixth round) of the 2005 NFL Draft after being selected by the New York Jets. He played one season for the Jets, securing five balls for 41 yards in 14 games. After missing the 2006 season, Dreessen signed with the Houston Texans, where he played from 2007-2011. In five season with Houston, Dresssen caught 105 passes for 1,323 yards and 13 touchdowns. In March 2012, Joel Dreessen signed a three-year contract with the Denver Broncos, worth $8.5 million. He played often in 2012, appearing in all 16 games and starting in all but one. His season totals were 41 catches, 356 yards and five touchdowns. Dreessen was used much more sparingly during the 2013 season, finishing with just seven catches for 47 yards and a touchdown in 13 games, none of them starts. He was a member of the Broncos team that won the AFC Championship and reached Super Bowl XLVIII. 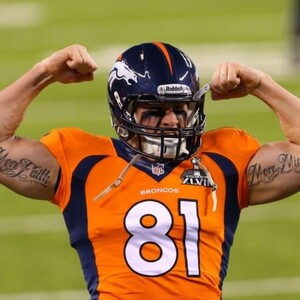