How much is Mean Joe Greene Worth?

Mean Joe Greene net worth: Mean Joe Greene is an American retired professional football player who has a net worth of $2 million. Mean Joe Greene was born in Elgin, Texas in September 1946. He attended Temple Dunbar High School and played college football for North Texas. Greene was drafted #4 by the Pittsburgh Steelers in the 1969 NFL Draft. He played his entire career for the Steelers from 1969 to 1981. During his illustrious career Mean Joe Greene was selected to the Pro Bowl 10 times. He was also a five time First-team All-Pro and three time Second-team All-Pro. 11 times he was named to the First-team All-AFC. Greene won four Super Bowl Championships with the Pittsburgh Steelers. He was the NFL Defensive Rookie of the Year, two time AP NFL Defensive Player of the Year, two time KCC 101 AFC Defensive Player of the Year, and two time NEA NFL Defensive MVP winner. Greene has been named to the NFL 75th Anniversary All-Time Team, NFL 1970s All-Decade Team, and Pittsburgh Steelers All-Time Team. He had his #75 retired by the Steelers and was inducted into the Pittsburgh Pro Football Hall of Fame. Greene has been ranked by NFL.com as the 13th best NFL Player of All-Time. He was inducted into the Pro Football Hall of Fame in 1987. He was well known for his role in the Coca-Cola "Hey Kid, Catch!" commercial in 1979. 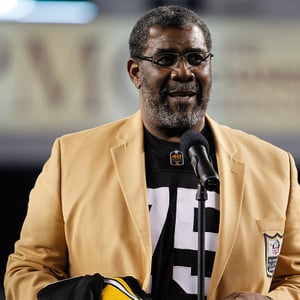