What is Joe Flacco's net worth and salary?

Joe Flacco is a Super Bowl winning quarterback who has a net worth of $85 million. During his time in the NFL Joe Flacco has played for the Philadelphia Eagles, Baltimore Ravens, Denver Broncos and New York Jets. Joe Flacco won a Super Bowl with the Ravens in 2013. He was a first round pick by the Ravens in 2008, and remained with the team through 2018. In 2019 he played one season with the Denver Broncos, followed by one season with the New York Jets. In 2021 he started with the Philadelphia Eagles before being traded to the New York Jets.

On February 3, 2013, Joe Flacco and the Ravens beat the 49ers to win the Super Bowl. Flacco, who was the Super Bowl MVP, was a free agent immediately after the win and was eligible for a major new contract. On March 1, 2013, Joe Flacco signed a new deal with the Ravens that was worth $120.6 million over six years. That was enough to make Joe Flacco the highest paid player in NFL history at that time. Under this contract, Flacco earned a base salary of roughly $20 million over six years. That worked out to $170,000 per in season day.

As of this writing, Joe Flacco has earned over $165 million in NFL salary alone. That makes him one of the highest-earning players in NFL history so far.

Joe Flacco was born in 1985 in Audubon, New Jersey as the oldest of brothers Mike, John, Brian, and Tom; he also has a sister, Stephanie. Flacco attended Audubon High School, where he played football, baseball, and basketball. After graduating, he went to the University of Pittsburgh, and became backup quarterback behind starter Tyler Palko. For the 2004 season, he saw action in three games, in which he threw only four passes.

In 2005, Flacco transferred to the University of Delaware. His first full-time action came the next year, when he threw 2,783 yards and 18 touchdowns. For the 2007 season, he led Delaware to an 8-3 regular-season record, throwing 4,263 yards and 23 touchdowns. His best game came against the Navy, when he threw for 434 yards and four touchdowns. Flacco continued the team's playoff run by upsetting the Northern Iowa Panthers in the FCS quarterfinals, and then upsetting the Southern Illinois Salukis in the semifinals. After throwing two touchdowns to win against the Panthers and the Salukis, he went on to lose the FCS National Championship Game to the Appalachian State Mountaineers. During his time with Delaware, Flacco set 20 school records.

In the 2008 NFL Draft, Flacco was drafted by the Baltimore Ravens with the 18th overall pick, making him the highest-drafted player ever to come from the University of Delaware. Later that year, he signed a five-year contract guaranteed at $8.75 million. For his first season, Flacco was the starting quarterback in the season opener against the Cincinnati Bengals. During the game, his 38-yard rushing touchdown became the longest such touchdown by a quarterback in franchise history; ultimately, the Ravens won the game 17-10. Flacco was named the AFC Offensive Player of the Week in week nine of the season, and the NFL Rookie of the Month in November. Flacco concluded his rookie season with 2,971 yards, and a total of 16 touchdowns and 14 turnovers.

Playing with the team from 2008 to midway through the 2018 season, Flacco helped lead the Ravens to the playoffs a total of six times. He also helped the Ravens win the AFC North twice, and brought the team to three AFC Championship Games. Perhaps Flacco's greatest successes came in 2013, when he led the Ravens to Super Bowl XLVII against the San Francisco 49ers. Although the 49ers were the favorites to win the game, Flacco's 22 of 33 passes and three touchdowns helped the Ravens rally to a 34-31 victory. He was named Super Bowl XLVII's MVP, finishing a postseason run in which he tied the single postseason record for touchdown passes without an interception. That offseason, Flacco signed a six-year contract valued at $120.6 million, making him the highest-paid quarterback in NFL history at the time. 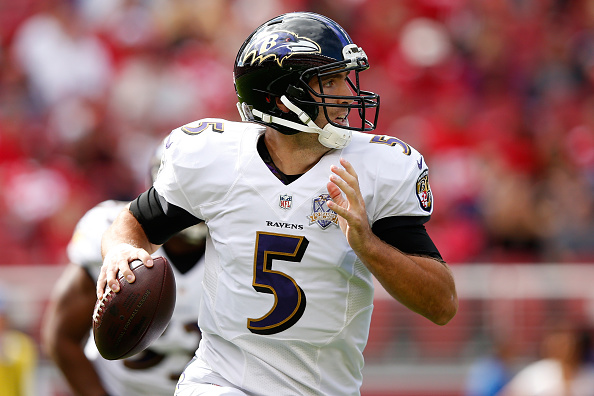 In February of 2019, after years of declining performance and a hip injury that saw him lose his starting position with the Ravens, Flacco was traded to the Denver Broncos. In his debut with the team, he threw for 268 yards in a loss against the Oakland Raiders. Flacco followed this with a string of further losses, and was sacked a career-high of nine times in a single game. Ultimately, a neck injury eight games into the 2019 season ended Flacco's season prematurely. The Broncos released him after the season when the team chose to start Drew Lock.

Flacco subsequently signed a one-year, $1.5 million deal with the New York Jets in May of 2020, as the backup quarterback behind Sam Darnold. In October, due to Darnold's shoulder injury, Flacco was named the starter against the Arizona Cardinals; he finished with 195 passing yards and a touchdown, losing 10-30. In the next game against the Miami Dolphins, the Jets lost 0-24, the first time Flacco had ever been shut out during his NFL career. Later, in Week 9 against the New England Patriots, Flacco again took the starting role after Darnold re-injured his shoulder; he subsequently had his best game of the season, going 18 for 25 for 262 yards and three touchdowns. Flacco also passed Joe Montana for 20th place on the all-time passing yards list.

In March of 2021, Flacco signed a $3.5 million one-year contract with the Philadelphia Eagles. In October 2021 Joe was traded to the Jets.

Flacco has done many corporate endorsements throughout his career. In 2008, while still a rookie, he signed a three-year contract with Reebok. From 2009 to 2010, he was a spokesperson for Pizza Hut. Other endorsements have been with Nike, Haribo, 1st Mariner Bank, McDonald's, and Zynga, for which he promoted a mobile application called "NFL Showdown: Football Manager."

In 2011, Flacco married his wife Dana. The couple has five children: sons Stephen, Daniel, Francis, and Thomas, and daughter Evelyn. Some of Flacco's own siblings, meanwhile, are also involved in sports. His brother Mike played for the MLB's Baltimore Orioles and Boston Red Sox, while his brother John played football for Stanford. His youngest brother, Tom, played for Western Michigan University, Rutgers, and Towson, and was signed by the CFL's Saskatchewan Roughriders.