What is Joe Burrow's Net Worth and Salary?

Joe Burrow is a professional football quarterback for the NFL's Cincinnati Bengals who has a net worth of $10 million. Prior to joining the NFL, he was a star player at Louisiana State University, where he won the Heisman Trophy and the 2020 College Football Playoff National Championship. In 2022, Burrow helped lead the Bengals to their first Super Bowl appearance in 34 years.

Joe Burrow was born on December 10, 1996 in Ames, Iowa to Jim, a former football player and coach, and Robin. He comes from a long lineage of athletes, including his basketball-playing grandmother and grandfather and his football-playing uncle. Burrow had his own first significant brush with sports when he attended the 2002 Rose Bowl. Shortly after this, he began playing in youth football leagues. With his family in 2003, Burrow moved to Fargo, North Dakota, where his dad was hired as the defensive coordinator for the North Dakota State Bison. Two years later, the family moved to Athens, Ohio when Burrow's father accepted a position at Ohio University. In Ohio, Burrow went to Athens High School, where he led the football team to three consecutive playoff appearances. As a senior in 2014, he received the Mr. Football Award and the Gatorade Player of the Year Award. Also at Athens High School, Burrow was a star basketball player.

In May of 2014, Burrow committed to playing football for Ohio State University. After redshirting in his freshman year, he became a backup to J. T. Barrett as a sophomore and junior. Burrow ended up transferring to Louisiana State University in 2018 after graduating early from Ohio State. His first year with LSU was a smashing success, marked by two SEC Offensive Player of the Week honors, a 10-3 record for the Tigers, and a number-six ranking in the final AP Poll. Burrow had even greater success in his second and final year at LSU, setting many school records. In recognition of his accomplishments, he won the 2019 Heisman Trophy in the largest margin of victory in that award's history, with 1,846 more votes than the second-place finisher Jalen Hurts. Burrow capped off his incredible LSU career at the 2020 National Championship Game, where he led the Tigers to a 42-25 victory over Clemson.

One of the hottest prospects around, Burrow was chosen first overall by the Cincinnati Bengals in the 2020 NFL Draft. In his debut, a loss to the Los Angeles Chargers, he threw for 193 passing yards and had 46 rushing yards. During his next game, a loss to the Cleveland Browns, he thew his first career passing touchdown. Burrow had his first career win against the Jacksonville Jaguars a couple weeks later. One of his best games came in Week 7, when he became the first-ever NFL rookie to record at least 400 passing yards, three passing touchdowns, and a rushing touchdown in the same game. However, Burrow's season was cut short when he suffered ACL and MCL injuries in Week 11, placing him on the injured reserve list. 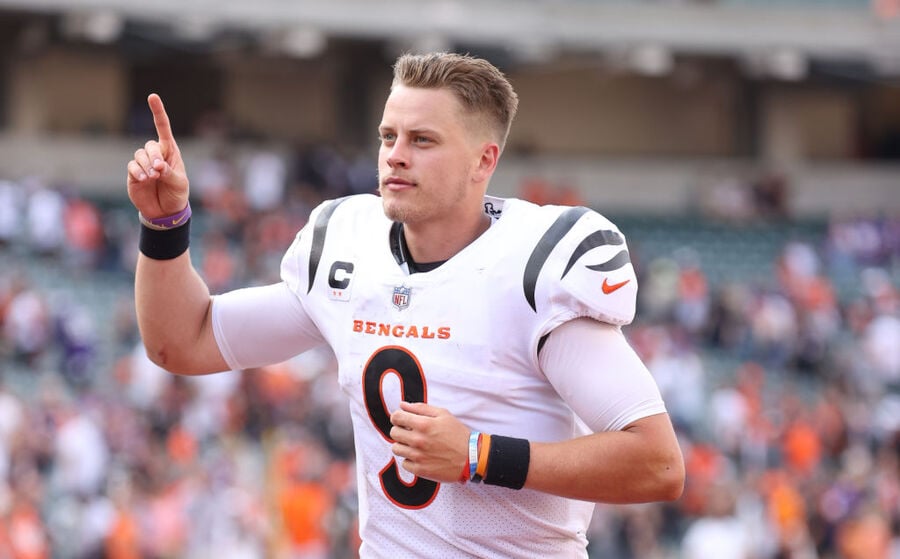 Burrow came back into play in time for the beginning of the 2021-22 season. He returned from his injury to help the Bengals to a 2-1 start. The season went exceptionally well from that point forward. In Week 4, Burrow was named the AFC Offensive Player of the Week. Later, in Week 16, he threw for a career-high 525 yards, the fourth most passing yards in any NFL game in history. Again, he was named the AFC Offensive Player of the Week. The next week, a victory over the Kansas City Chiefs gave the Bengals their first playoff berth since 2015. The team went on to defeat the Las Vegas Raiders in the wild card round, giving them their first playoff win since 1990, and thus ending the longest active drought in major North American sports. In the subsequent historic AFC Championship Game, Burrow and the Bengals memorably overcame a 21-3 deficit to win 27-24 in overtime against the Chiefs. Due to this victory, the Bengals clinched their first Super Bowl appearance since 1988.

With the Bengals, Burrow holds franchise records for completion percentage, passer rating, and passing yards in a single game. Additionally, he is tied with Boomer Esiason for the most playoff wins. Also of note is that Burrow helped the Bengals win their first-ever playoff game on the road, which they did against the top-seeded Tennessee Titans. In the game, Burrow became the most-sacked quarterback ever to win a playoff game, with nine sacks.

A major fan of Kid Cudi, Burrow has revealed that he often listens to the rapper's music just before each Bengals game.

In a departure from many professional athletes, Burrow has stated that he plans to save all of his contract money with the Bengals, and to live instead on income gained through endorsements. 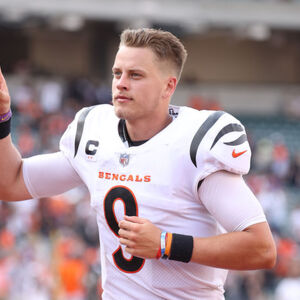