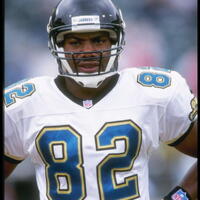 Jimmy Smith Net Worth: Jimmy Smith is an American former professional football player who has a net worth of $1 million. Jimmy Smith was born in Detroit, Michigan in February 1969. Smith was a wide receiver who won All-Conference honors playing at Callaway High School in Jackson, Mississippi. He played at Jackson State University for two seasons. Smith was drafted #36 by the Dallas Cowboys in the 1992 NFL Draft. He played for the Cowboys until 1993 when he was cut after suffering injuries. He was signed and cut by the Philadelphia Eagles in 1994 and landed with the Jacksonville Jaguars where he played from 19994 to 2005. While playing for the Cowboys Smith won two Super Bowl Championships. He was a five time Pro Bowl selection with the Jaguars and a two time Second-team AP All-Pro selection. Smith was the NFL receptions leader in 1999 and won the Ed Block Courage Award in 2001. He holds many Jaguars franchise records and also holds NFL records for most games with at least 5 receptions in a season, most consecutive games with at least 5 receptions, and most games with at least 49 receiving yards in a season. Smith has battled a cocaine addiction and was sentenced to six years on drug and weapons charges. He started his sentence in 2013 but was released on the condition of house arrest the same year.