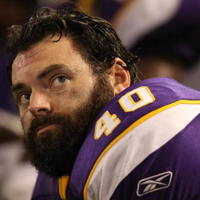 Jim Kleinsasser Net Worth: Jim Kleinsasser is a retired American professional football player who has a net worth of $12 million. Born in 1977 in Carrington, North Dakota, Jim Kleinsasser played college football in his home state for the University of North Dakota Fighting Sioux. The Minnesota Vikings drafted him with the 44th overall pick during the second round of the 1999 NFL Draft. Kleinsasser went on to play every snap of his pro career with the Vikings. He remained with the team for more than a decade, playing from 1999 until 2011. Kleinsasser, a six-foot-three, 272-pound tight end, was twice selected to the All-Joe team put together by the "USA Today" in 2007 and again in 2008. He finished his pro playing career with 192 receptions for 1,688 receiving yards and six touchdowns. Kleinsasser also rushed for close to 150 total yards and one touchdown, with a 3.4 average rushing yards per attempt career mark. Kleinsasser was often known for his skill in pass and run blocking, and was a fixture on the offensive line as teammate Adrian Peterson shattered several team records and led the league in rushing during the 2008 season. Kleinsasser announced his retirement following the 2011 season. He played professionally for 13 years.