Jim Brown Net Worth: Jim Brown is an American former professional football player and actor who has a net worth of $30 million. Brown is known for two successful careers in athletics and acting. He first gained prominence as a professional fullback in the NFL, and he gained a reputation as being one of the best running backs of all time and one of the best players ever in the NFL.

In 1964, he won an NFL championship with the Cleveland Browns. During his nine-season career, Brown led the league in rushing yards in all but a single season. His average of 5.2 yards per rush is the second-best in running back history. In 1971, he was inducted into the Pro Football Hall of Fame. After retiring from football, Jim pursued a successful acting career and booked several leading roles throughout the 70s.

Early Life: James Nathaniel Brown was born on February 17th of 1936 in St. Simons Island, Georgia. His father was a professional boxer. During his years at secondary school, Jim played football, lacrosse, baseball, and basketball. He also joined the track & field team. Despite his later success as a football star, Brown would exhibit talent in all of these sports, particularly basketball.

After graduating from high school, Brown attended Syracuse University and played for the school team. He played extremely well during these years and proved his potential as a future player in the NFL. Once again, Jim joined several other sports teams during his time at Syracuse, including the basketball, track, and lacrosse teams. This time, he would show particular potential in lacrosse. He was eventually named as a first-team All-American in lacrosse.

Playing Career: Despite his obvious potential in a number of sports, Brown chose to pursue a career in the NFL. He was selected by the Cleveland Browns during the 1957 NFL draft. He quickly proved his abilities after rushing for 237 yards in a game against the LA Rams. By 1958, he had broken the single-season rushing record with 1,527 yards. During this MVP season, Jim scored 17 touchdowns, which was nine more than his closest rival.

After nine years with the Cleveland Browns, Brown decided to retire. He had achieved an incredible number of achievements during this period. Jim had broken records for career rushing yards, rushing touchdowns, total touchdowns, and all-purpose yards. He also became the first player to ever amass more than 100 rushing touchdowns, a feat that very few players have matched since his days in the NFL. This is despite the season being expanded from 12 games to 16 games in recent years.

Brown's final Pro Bowl game was one to remember, as he scored three touchdowns before leaving his career as an athlete behind. He was only 29 when he retired, which is younger than most players decide to retire today. During his playing career, Brown developed a reputation for being extremely difficult to tackle, and it usually required more than one defender to finally bring him down. Another important achievement in Jim's playing career was his NFL championship title in 1964. 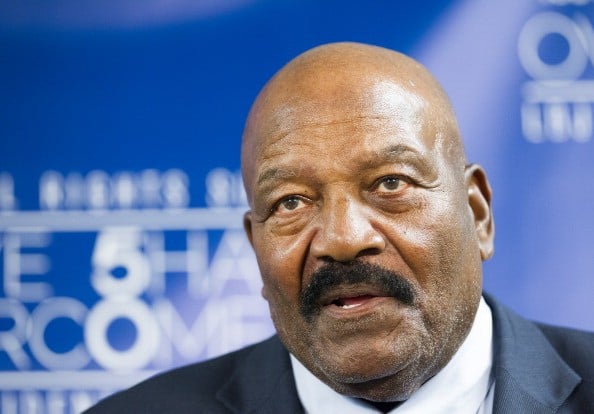 Acting Career: Brown began his acting career before leaving the NFL, and his first major role was in a Western film called "Rio Conchos" in 1964. Unfortunately, the film received mixed reviews. By 1966, Jim was working on his second film in London – "The Dirty Dozen." Brown played the role of Robert Jefferson, a convict who has been sent along with a kill team to assassinate German officers before D-Day. His commitment to this film resulted in him retiring from football.

The film proved to be a massive hit, and it led to increased opportunities for Brown down the line. After playing a villain in an episode of "I Spy," Jim booked another major role in the film "Dark of the Sun." He then booked another role in "Ice Station Zebra." These roles prepared him for his future as a leading man in Hollywood. His first role as a leading man was in "The Split," and he reportedly earned $125,000 for this role. Brown then followed up with "Riot." Both films were hits at the box office and led to Jim earning a reputation as "Hollywood's first black action star."

Brown then booked another role in 1969's "100 Rifles," before following up with "Kenner" and "… tick … tick … tick …" By the 1970s, Brown had cemented his position as a leading man, booking leading roles in films like "The Grasshopper," "El Condor," "Slaughter," "Black Gunn," "Three the Hard Way," and many others. This was during the height of the so-called "blaxploitation era" of Hollywood, which eventually faded after 1975. "Take a Hard Ride" proved to be the end of Brown's near-limitless opportunities for leading roles.

Over the next few decades, acting opportunities for Jim were harder to come by. However, he still managed to appear in films like "Fingers" towards the tail-end of the 70s. During the 80s, he mostly switched his focus towards television roles, appearing in shows like "Knight Rider," "The A-Team," and "CHiPs." From the 80s onwards, he also appeared in movies like "The Running Man," "I'm Gonna Git You Sucka," "Mars Attacks!," "Sucker Free City," and "Any Given Sunday."

Relationships: Having first married Sue Brown in 1959, Jim was divorced by 1968. They had three children together over the course of their relationship. He was later arrested for assault and battery against an 18-year-old girl. He was later faced with a paternity lawsuit after allegedly fathering a child with this girl.

Eventually, he married his second wife, Monique Brown. They subsequently had two children together before Brown was charged with making terrorist threats towards his wife. He was also charged with domestic violence.

Real Estate: In 1968 Jim bought a large mansion in the Hollywood Hills. Today the home is likely worth $6-10 million. He also owns a condo in Miami 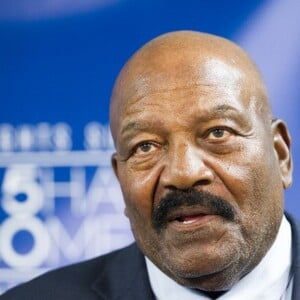