Jerry Rice Net Worth and Career Earnings: Jerry Rice is an American retired professional football player who has a net worth of $50 million. During Rice's 20-year career, he played as a wide receiver and gained considerable fame with the San Francisco 49ers. After starting his career as a college player for Mississippi Valley State, he was drafted by the 49ers in 1985. He spent 16 seasons with the 49ers before finishing his career with teams like the Oakland Raiders and the Seattle Seahawks.

Today, Rice is considered the greatest wide receiver ever to play in the NFL, and many consider him to be one of the best NFL players of all time. This is mostly due to Jerry's many record-setting career accomplishments. These include most receptions, most touchdown receptions, and most receiving yards. Jerry has also scored more points than any other non-kicker in NFL history, with a total of 1,256. In total, Rice holds more than 100 records, which is more than any other player by a long shot. In terms of his team achievements, Rice won the Super Bowl three times with the 49ers. In 2010, Jerry Rice was inducted into the Pro Football Hall of Fame.

Early Life: Jerry Lee Rice Sr. was born on October 13th of 1962 in Starkville, Mississippi. Raised in the town of Crawford by a brick mason, Jerry attended high school in Oktoc but was forbidden to play football by his mother during his freshman year. As the story goes, the school principal discovered Rice's incredible speed when he caught him skipping class. Seeing the principal, Jerry sprinted away at high speed, and the football coach was informed of the boy's abilities. Rice was subsequently offered a place on the team. During his high school years, Jerry eventually excelled in a number of other athletic pursuits, such as basketball and track & field.

During his college years, Jerry's reputation grew while he was playing for Mississippi Valley State University. Paired up with quarterback Willie Toten, Rice quickly became an integral part of the team and set numerous records. It was quickly obvious that Jerry had a promising future ahead of him in the NFL.

NFL Career: Rice's rookie season with the 49ers was a little inconsistent, but he did enough to impress numerous observers. During Super Bowl XXIII in 1988, Jerry played one of his best games ever, catching 11 passes for 215 yards – including one touchdown. The 49ers beat the Cincinnati Bengals to win the Super Bowl that year. He continued to have outstanding seasons over the next few years, setting numerous records and winning the Super Bowl once again in 1989 and in 1994.

In 1997, Jerry Rice suffered a serious left knee injury, tearing his anterior cruciate and medial collateral ligaments. It took him 14 weeks to return to action, and he was acting against the advice of doctors who advised him to rest for a longer period of time. Unfortunately, Jerry cracked the patella in his left kneecap on his first game back, which led to further time out of action. In 1999, Rice failed to reach 1,000 receiving yards per season for the first time in his career.

After the 2000 season, Rice moved to the Oakland Raiders and performed well for a couple of seasons before requesting a trade. He then ended his career with the Seattle Seahawks and the Denver Broncos, officially retiring in 2005.

Entertainment Career: Outside of football, Jerry Rice has appeared in a wide range of commercials, films, and TV shows. At one point, he competed in "Dancing with the Stars," reaching the final two before being eliminated. He has appeared in the film "Without a Paddle: Nature's Calling" and in the TV show "Rules of Engagement." In addition, Rice has released two semi-autobiographical books over the years.

Contracts and Earnings: During his 20-year career in the NFL, Rice earned a sum total of $23.3 million. This equates to an average of about $1 million per season. His first contract was a five-year, $1.885-million deal with the 49ers, signed almost immediately after he had been drafted.

Jerry reached his peak salary in 2000, when he earned $2.5 million during his final season with the 49ers. However, his best-earning year came during 1996, when he earned a base salary of $1.6 million, plus a $4 million signing bonus. Funnily enough, Rice's net worth seems to have risen considerably after he retired from professional football.

Real Estate: In 2009, it was announced that Jerry Rice was selling his home in Silicon Valley. The home spans almost 14,000 square feet, and it is located in Atherton, California. It is unclear how much Rice originally paid for the home. The home sits on 1.4 acres of land, and it features French chateau-style architecture and interior design. Inside, there are six bedrooms, a library, a movie theater, a seven-car garage, and a 5,000-square-foot basement. This basement boasts a game room, a wine room, a full gym, a sauna, a steam room, and a crafts room. According to the listing, the home contains more than $2 million worth of electronic equipment and $500,000 worth of gym equipment. Outside, there is a pool complete with a pool house.

Over the years, the price of the mansion has fluctuated significantly. At one point, it was priced at $22 million. In 2011, it was reported that Jerry was suing potential buyers who committed to the purchase before backing out at the last minute. He aimed to keep their $330,000 deposit after they had missed the deadline. At this point, the property was priced at $11 million. In 2012, Jerry had apparently relisted the property with an asking price of $10.5 million. In 2013, Rice was finally able to sell the residence, reportedly accepting an offer of $9 million. 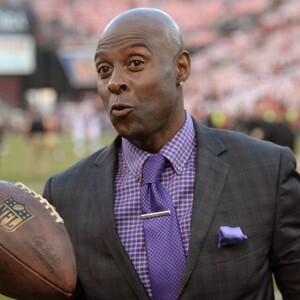