As a true freshman in 2008, Kearse started in two out of 12 games played, and caught 20 passes for 301 yards and two scores. In 2009, he started nine out of 12 games, leading the team in receptions (50), yards (866), and touchdowns (eight). That performance earned him a second team All-Pac-10 selection. In 2010, as a junior, Kearse started all 13 games and led the team once again in receptions, finishing with 63 receptions, 1,005 yards and 12 touchdowns. For the second straight year he was named to the All-Pac-10 second team. As a senior, he recorded 47 receptions for 699 yards and seven touchdowns. After the 2012 draft, Jermaine Kearse joined the Seattle Seahawks as an undrafted free agent. He played mostly on special teams his rookie year, finishing with three catches for 31 yards. During the offseason, Kearse had LASIK surgery to improve his vision. During the 2013 season, Kearse had 22 catches for 346 yards and four touchdowns. In the NFC Championship game against the 49ers, he caught what would become the game-winning 35-yard touchdown. 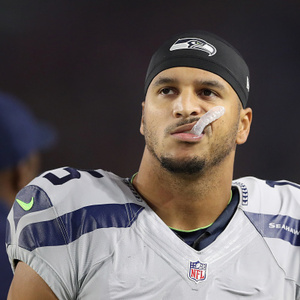