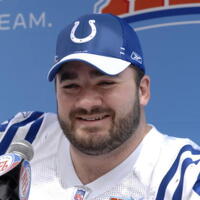 Jeff Saturday Net Worth: Jeff Saturday is a retired American professional football player who has a net worth of $15 million. Jeff Saturday was born in Atlanta, Georgia, in 1975. His college football career began along the offensive line with the North Carolina Tarheels. Saturday earned first-team All-ACC honors in 1996 and 1997, but went undrafted during the 1998 NFL Draft. He landed a free agent deal with the Baltimore Ravens, but ended up making his professional debut in 1999 with the Indianapolis Colts. Saturday went on to become a mainstay along the Colts' offensive line for more than a decade. He is a six-time Pro Bowler (2005-2007, 2009, 2010, 2011), and a two-time first-team All-Pro (2005, 2007). Saturday was part of the Colts' Super Bowl XLI championship-winning team and won two AFC crowns with Indianapolis in 2006 and 2009. He earned NFL Alumni Offensive Lineman of the Year honors in 2007. Saturday played with the Green Bay Packers for one season before retiring after his benching in early 2013. He signed a one-day deal with the Colts on March 7, 2013 to retire as a member of the team. He played in 211 career games with 202 starts; Saturday recovered nine fumbles during his career. Saturday and his wife, Karen, have three children together.