What is Jeff Garcia's Net Worth and Career Earnings?

Jeff Garcia is a retired American football player who has a net worth of $20 million. Jeff Garcia played in the NFL with the San Francisco 49ers, Cleveland Browns, Detroit Lions, Philadelphia Eagles, and Tampa Bay Buccaneers. Among his accomplishments, he was selected to the Pro Bowl four times, and helped lead the 49ers to the second-largest comeback victory in the history of the NFL playoffs. Beyond the NFL, Garcia played in the Canadian Football League and the United Football League.

During his NFL career, Jeff Garcia earned around $40 million in salary and endorsements.

Jeff Garcia was born on February 24, 1970 in Gilroy, California as the third of seven children of Linda and Bob. Before he was born, his parents had twin girls who passed away. When Garcia was seven, his younger brother Jason drowned on a family camping excursion; a little over a year later, his younger sister Kimberly was killed after falling from a truck. His surviving sisters, both younger than him, are Jene and Melissa.

As a teen, Garcia went to Gilroy High School, where he lettered in both football and basketball. Garcia subsequently attended Gavilan College, a junior college in Santa Clara County. As the starting quarterback on the school's football team for the 1989 season, he passed 2,038 yards for 18 touchdowns and rushed 584 yards for four touchdowns.

Garcia transferred from Gavilan College to San Jose State University in 1990. After redshirting his first year, he became the starting quarterback for the SJS Spartans from 1991 to 1993. During his junior season in 1992, Garcia received UPI All-America honors. In his senior year, he posted a career-high 2,608 yards on 196-for-356 passing, and also recorded 21 touchdowns and 16 interceptions.

With his 6-foot and 195-pound stature, Garcia was considered too diminutive for the NFL, and so was passed up in the 1994 NFL Draft. In light of this, he began his professional career with the Canadian Football League's Calgary Stampeders. Working his way up the team's ranks, Garcia began starting for the Stampeders in 1995. In his second start, he set a new team record with 546 passing yards and six touchdown passes. Garcia became the permanent starting quarterback in 1996 following the departure of Doug Flutie. The following year, he won the Jeff Nicklin Memorial Trophy as the best player in the CFL Western Division. In 1998, Garcia helped lead the Stampeders to a Grey Cup win against the Hamilton Tiger-Cats.

Garcia made his NFL debut in the 1999 season with the San Francisco 49ers, coming on as a replacement for the concussed Steve Young. In his first NFL start, he helped the team win against the Tennessee Titans. With Young officially retired for the 2000 season, Garcia remained as the 49ers' starting quarterback. He went on to post a new team record with 4,278 passing yards. The following season, Garcia recorded a career-high 32 touchdown passes and helped lead the 49ers to the playoffs. Although Garcia didn't perform as well during the regular season in 2002, the 49ers nevertheless won the NFC West and advanced to the playoffs once again. It was in the playoffs that Garcia had perhaps his biggest career accomplishment, leading the 49ers to a comeback victory over the New York Giants in the second-largest come-from-behind win in NFL playoff history.

Despite Garcia and his team's incredible comeback win in the 2002 playoffs, the 49ers ultimately fell to eventual Super Bowl champion the Tampa Bay Buccaneers. Following this, the 49ers fired head coach Steve Mariucci and hired Dennis Erickson in his place. Garcia went on to have a disappointing final season with the 49ers in 2003, marking the beginning of a period of lackluster performances. After the season was over – with the 49ers missing the playoffs for the first time in three seasons – Garcia was released. 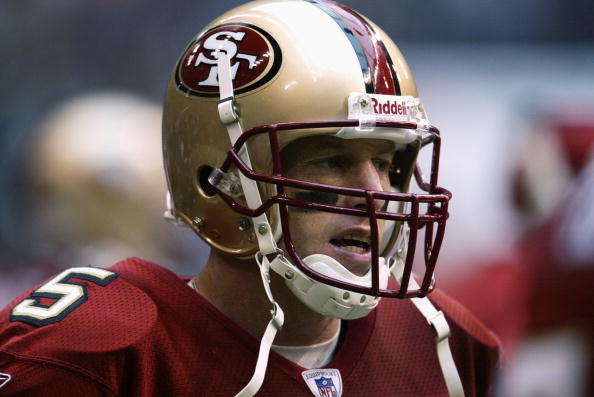 In 2004, Garcia signed with the Cleveland Browns. Still unable to get out of his playing rut, he struggled to regain consistency and weathered a number of injuries. Despite this, Garcia did manage one significant feat with the Browns: tying the record for longest career pass play at 99 yards. Following the end of the season, Garcia was released.

Garcia signed to a one-year deal with the Detroit Lions in 2005. However, misfortune continued to plague him as he broke his fibula in a preseason game against the Buffalo Bills. After leading the Lions to a win against the Browns in October, Garcia was named the starting quarterback for the rest of the season. However, he went on to struggle mightily, and his contract was not renewed.

In 2006, Garcia signed a one-year contract with the Philadelphia Eagles to become the primary backup to Donovan McNabb. After McNabb's season ended in November due to a knee injury, Garcia was named the starting quarterback for the remainder of the season. He went on to regain his mojo as he helped lead the Eagles to five straight victories and the NFC East Division title. In early 2007, Garcia posted his second-ever playoff victory in a win over the Giants. Although Garcia expressed his desire to re-sign with the Eagles following the season's end, the team ultimately chose not to renew his contract.

Garcia signed with the Tampa Bay Buccaneers in 2007. Turning the team's fortunes around from its poor 2006 season, he helped lead the Bucs to the NFC South Division title. Later, in the Wild Card game, they fell to the eventual Super Bowl champion the New York Giants. During the 2008 season, Garcia became part of a quarterback rotation with Luke McCown and Brian Griese. Following four straight losses at the end of the season, the Bucs elected not to re-sign Garcia.

In 2009, Garcia signed a one-year contract with the Oakland Raiders; ultimately, he was released before playing. Garcia subsequently returned to the Eagles, but was released after one game. In 2010, he joined the United Football League's Omaha Nighthawks. The following year, Garcia went back to the NFL and signed with the Houston Texans; however, he didn't see any play.

In 2012, Garcia became a member of the advisory board of the United States Football League. Two years later, he became an offensive consultant and quarterbacks coach for the Canadian Football League's Montreal Alouettes. In 2015, Garcia served as an offensive assistant for the Los Angeles Rams.

Garcia married Playboy model Carmella DeCesare in 2007. She was Playmate of the Year in 2005. They have four children.

Here is a video tour of their former home: 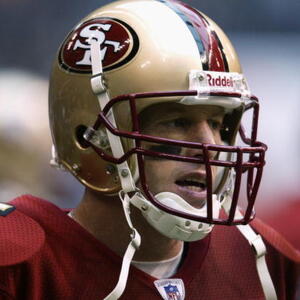