Jason Witten net worth: Jason Witten is an American football player who plays in the position of tight end for the Dallas Cowboys and has a net worth of $12 Million. He was born in Elizabethton, Tennessee on the 6th of May, 1982. At the age of eleven he moved with his grandparents, due to his father's abusive behavior on his mother and because his grandfather was coaching the football team, Witten gained experience quickly, contributing to his team's wins and reaching the state semi finals three times.

He received a scholarship from University of Tennessee, which he accepted and he played for the Tennessee Volunteers football team as defensive end and tight end. While he was in college he set school records for the number of receptions, received yard and touchdowns he achieved. Witten started his professional career in 2003, playing in the National Football League Draft's 3rd round, but due to having a limited role in his rookie season, he started only seven out of fifteen games he played in. While playing against the Arizona Cardinals, he was hit and his jaw was broken, but that didn't stop him to continue and he only missed one game afterwards. The following year Witten set a team record for his position and was chosen for his first Pro Bowl, which happened in 2006 and 2007 as well, when he was also nominated for the Walter Payton NFL Man of the Year Award. In 2012 he was chosen for his 8th Pro Bowl and the following year he became the tight end with the second most receptions in NFL history, surpassing Shannon Sharpe's record. 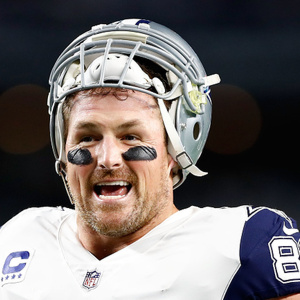