Jason Smith net worth and salary: Jason Smith's salary is $20.6 million. His current contract guarantees him $33 million and could be as much as $61 million over 6 years. Jason Smith is an American professional football player who has a net worth of $20 million. Jason Smith has earned his net worth as offensive tackle for the St Louis Rams of the National Football League. Prior to being drafted in the 2009 NFL Draft by the Rams, Smith played college football at Baylor University in Waco, Texas. Jason was born in Dallas, Texas on April 30, 1986; he attended W.T. White High School in Dallas and was the First-team All-District honors as a sophomore and junior as an offensive tackle. He changed his playing position to tight end, during his senior year, accomplishing catching seven passes for 101 yards and one touchdown, and was received All-District honors. Smith was offered a scholarship by Baylor University and accepted the same day of the offer. At Baylor he played tight end during the 2005 season, appearing in 11 games, starting eight. He caught 6 passes for 70 yards and one touchdown. His sophomore year he played on the offensive line, he started all 12 games at right tackle. He missed several games during his junior year at Baylor due to a sprained knee injury however he earned an All-Big 12 honorable mention, for the seven games he started at left tackle. Smith graduated a year early from the school in May 2008, after earning his Bachelor of Science in Education degree in recreation. Smith was picked 2nd overall in the 2009 NFL Draft, which made him the highest drafted player out of Baylor. Smith signed a six-year contract with the Rams for $33 million in guarantees on July 30, 2009. The deal has a maximum value of $61 million with the sixth year being voidable, which would leave Smith with $6.6 million per year over five years. On November 22, 2009 he suffered a serious concussion causing him to miss the remainder of the season. 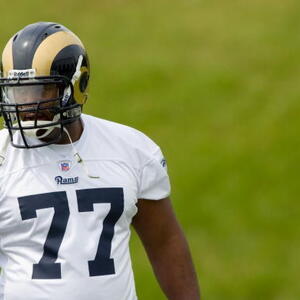