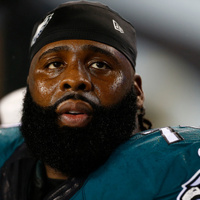 Jason Peters net worth: Jason Peters is an American professional football player who has a net worth of $20 million. Jason Peters was born in Queen City, Texas in January 1982. He is an offensive tackle who played at Queen City High School. Peters played his college football at Arkansas and was named second-team All-SEC in 2003. He went undrafted but signed with the Buffalo Bills of the National Football League in 2004. He played for the Bills from 2004 to 2009 and joined the Philadelphia Eagles in 2009. Jason Peters made the Pro Bowl from 2007 to 2011 and again from 2013 to 2016. He was a first-team All-Pro in 2011 and 2013 and a four time second-team All-Pro. In 2018 he won the Super Bowl with the Eagles. Peters signed a $15 million deal for five years in 2006. In 2009 he signed a six-year deal with Philadelphia worth $60 million and in 2014 he signed a five-year deal for $51.3 million.