How much is Jared Goff Worth?

Jared Goff net worth and salary: Jared Goff is an American professional football player who has a net worth of $30 million. Jared Goff was born in Novato, California in October 1994. He is a quarterback who played at Marin Catholic High School. Goff played his college football for California and was named first-team All-Pac-12 in 2015. He was drafted #1 overall in the 2016 NFL Draft by the Los Angeles Rams. In 2016 he signed a four year deal for $27.9 million with the Rams. He is the highest-earning player from the 2016-NFL draft class. Between 2016 and 2017 alone he earned $19 million. His annual salary in that time frame was $7 million. He was expected to sign a large 5th-year option in 2020. During his three seasons at Cal, Goff threw for 977 completions for 12,195 yards and 96 touchdowns. His father Jerry Goff was a Major League Baseball player and also was an athlete at Cal.

In August 2019 Jared signed a new four-year deal with the Rams worth $134 million. The contract includes an NFL-record $110 million guaranteed money and both a $25 million signing bonus and $21 million roster bonus. Between those bonuses and other earnings, Jared made $50 million between June 2019 and June 2020. He earns roughly $2 million per year endorsing for brands including Red Bull, BMW, Bose, Banana Republic, Nike and Pizza Hut.

In 2020 he donated $250,000 to the Los Angeles food bank to support people during the Coronavirus. 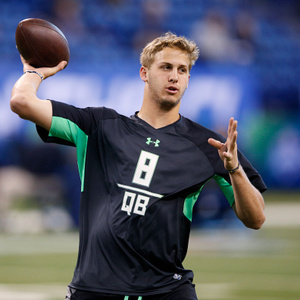