How much is Jared Allen Worth?

Jared Allen net worth: Jared Allen is an American professional football player who has a net worth of $26 million. Jared Allen was born in Los Gatos, California in April 1982. He is an outside linebacker who was named Defensive Player of the Year at Los Gatos High School. Allen played his college football at Idaho State where he won the Buck Buchanan Award in 2003. He was drafted #126 by the Kansas City Chiefs in the 2004 NFL Draft and played for Kansas City through 2007. Allen played with the Minnesota Vikings from 2008 to 2013 and has been with the Chicago Bears since 2014. He has been selected to the Pro Bowl five times and as a First-team All-Pro four times. Allen is a two time NFL Sacks leader, two time NFC Sacks leader, and one time AFC Sacks leader. He was named the NFL Alumni Pass Rusher of the Year in 2007, the NFL Alumni Defensive Lineman of the Year in 2011, and the NFC Defensive Player of the Year in 2011. Allen is a member of the 100 Sacks Club and of the 50 Greatest Vikings. He holds the Vikings' single season sack record with 22. He signed a one year deal with the Chiefs in 2007 for $2.35 million and in 2008 they paid him $8.8 million. He signed a six year deal with the Vikings for $72.36 million and then a four year deal with the Bears for $32 million. 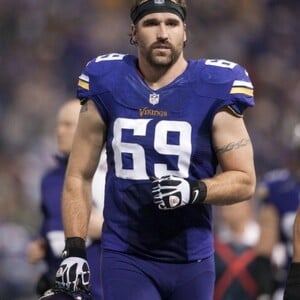